The lies (Western slander) which well-meaning zeal has heaped round this man (Muhammad) are disgraceful to ourselves only.

Thomas Carlyle (On Heroes, Hero Worship and the Heroic in History)

Before I proceed with the story of Muhammad, as related by Professor John L Esposito, I need to share a couple of definitions. The word Islam means “submission” or “surrender.” A Muslim is a person who submits/surrenders to the will of God in accordance with the scripture of the Quran, whose content was revealed to Muhammad.

The history of the prophet of Islam began in 570 AD, when he was born into the most powerful tribe in Mecca. This was about 2,200 years after the time of Abraham and his effort to replace idol worship with the belief in one, all-powerful God, and things seem to have deteriorated.

There were Christians and Jews in the land we know as Arabia, but polytheism abounded. In fact, the Kaaba, the house that Abraham and his son, Ishmael, had supposedly restored, now housed some 360 tribal deities. The pilgrimages to the Kaaba had turned Mecca into a thriving commercial center.

Some had profited mightily, and disparity in wealth and tribal rule had created social injustice that Muhammad would experience personally. His father died early, leaving his mother inadequately provided for in the patriarchal society. She soon died as well, leaving the orphaned Muhammad in the care of his uncle.

According to Esposito, Muhammad was illiterate but became known for being trustworthy and reflective in nature. He was apparently also good in business matters and became the manager of caravans for a wealthy widow named Khadija. She was 40 years old and he was 25 when, as the story goes, she convinced him to marry her. During the 24 years before she died, she was his only wife. 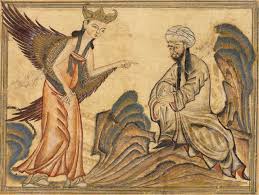 Muhammad regularly retreated to a hilltop cave to think about the meaning of life. At the age of 40, he was called to be a prophet. That night he heard a voice commanding, “Recite!” At first there was no detail about what Muhammad was to recite; and when it began to come in from the Angel Gabriel, he feared that he was losing his mind. However, Khadija reassured him about the validity of the material and became his first convert.

The revelations continued to be received from 610 AD until Muhammad’s death at age 62 in 632 AD. There is a distinction here between the provenance of material preserved in the Torah and the Bible versus in the Quran. In the time of Abraham and Jesus, very few people were literate, and there is a question about how distant the first scribes were from the actual events and teachings that were published. In the case of Muhammad, and although he was illiterate, it is claimed that the messages he received were continuously preserved in both oral and written form. However, it was over about two decades after his death that they were compiled in their current form. Nevertheless, Muslims believe that the Quran is a more accurate expression of God’s will.

When Muhammad first began to share his revelations, they were not welcome in a society in which tribal loyalty and family honor were the primary virtues. From the beginning, he called for the creation of a “just society” that would provide for the most vulnerable, including women, children, orphans and the poor. This did not resonate with the powerful and the wealthy. And it also made no sense to them to rely on the guidance of only one deity when pilgrimages to the many idols in the Kaaba were such a fine source of revenue.

As a result, Muhammad the prophet was increasingly persecuted and threatened. In 622 AD, he and 200 followers escaped to Medina, 250 miles northeast of Mecca, where he began to establish a community based on the substance of the revelations. This was the juncture at which Islam ceased to be merely a religion and became also a political system. It was here, according to Esposito, that being a Muslim began to mean living in “an Islamic community-state, governed by Islamic law.”

The Governance of Medina

Medina was a diverse community, encompassing Christians and Jews (known as “People of the Book”) and polytheists as well as the incoming Muslims. It was apparently Muhammad’s intention to coexist with them all and allow them to practice their religions, as long as they paid a poll tax that would be used to help create the just society he envisioned. Muslims there prospered, which was interpreted as a sign of God’s favor.

The tensions with Mecca continued, however, and Muhammad evolved into a military leader as well as a prophet, lawgiver, and statesman. Finally, there was a decisive battle in 627 AD called “The Battle of the Ditch,” in which Muhammad defeated the forces of Mecca. Unfortunately, some powerful Jewish tribes fought against him in that battle. All the men were executed afterward, resulting in enduring alienation.

At first, Muhammad had a truce with Mecca but then went on to subdue it. Over the remaining years of his life, he consolidated rule over the rest of Arabia. The ensuing spread of Islam over about 1,400 years  is a very complex story that involves ongoing religious conflict, conquest, diplomacy, Western invasion, commerce, and extraordinary achievements in science and the arts.

The spirituality of Islam may seem alien to Western minds, and I have to admit that the culture has sometimes seemed “backward” to me.  And of course the penchant for terrorism is frightening. However, it also seems obvious that there must be something important and appealing in the revelations that Muhammad received that have made Islam the fastest growing religion in the world today and one that has a footing in 56 countries. My next post will try to identify some of the basics we should all know about it.

2 Responses to “The Story of Muhammad”