As I wrote earlier, I come from a family of storytellers, and this quote made me think more deeply about the value of not only hearing but also reading stories. I think stories are essential to civilization as well as to survival. In entering the lives and minds of fictional characters, we learn about history, other cultures, and the intimate experiences of people very unlike ourselves. Fiction can reveal how complex humanity is, and it can create empathy and the ability to get along with one another.

I have the full range of storytellers in my family, and I will give examples. My brother-in-law, Paul Karlstrom, is currently being widely lauded for a biography titled Peter Selz, Sketches of a Life in Art. His subject, a famous pioneer historian of modern art, is still dynamically engaged in the world at 93, and what a story his life has been.

My brother, Wiley, on the other hand is probably the best “raconteur,” that I have ever heard. A Texas veterinarian who has treated a full range of creatures from horses and cows through dogs and cats, an ostrich, and even a turtle, he amazes and amuses with countless tales of practice drama as well as his adventures hunting and fishing. He would probably become a National Treasure if someone would record him.

And then we have the Alabama branch.

My father’s late brother, W.L. Heath, was a very successful writer; and his son Merrill is carrying on the tradition. Merrill writes engaging Alec Stover mystery novel; but the book I’m eagerly awaiting is Timebox, which will create a great adventure in virtual reality through his expertise in computers.

Merrill has recently collected a set of short stories written by father and son separately and in collaboration. They vary from a whimsical jewel about an elf that Merrill wrote in high school through his father’s unforgettable account of the duck hunt of a dying man to a brilliant entry (on which they both worked) into the senses of a greedy, blind beggar. How is that for variety? The e-book can be ordered at: 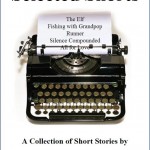 Summer visits with their family in the small town of Scottsboro, Alabama, provided inspiration for the setting of Atheneum in my own novel, The Inheritance. I wrote from the perspective of a visitor, but in helping Merrill edit his father’s books for publication in electronic format, I was privileged to reread stories I had enjoyed decades ago. Here the “old”  South is revealed through the eyes of a gifted writer on the ground at the time, who captured every visual detail and every nuance of speech.

I loved The Help by Kathryn Stockett, who is also a southerner. However, the world Uncle Bill created in Ill Wind and The Hackamore Saga, my two favorite novels, is very different, and the comparison is fascinating. The voice in the latter is of a retired barber talking about small town history, and I found the reading very relaxing, very soothing. It also inspired an unfamiliar sense of acceptance about the way life is. It made me realize that every single person everywhere whether good, bad, mediocre, or tragic is a story, a wonderful story, no matter how it turns out. Clearly, there is no excuse for writer’s block.

The spectrum of books by the Heaths can be viewed at http://merrillheath.wordpress.com.

One Response to “The Storytellers”