“Show me a hero and I’ll write you a tragedy.” 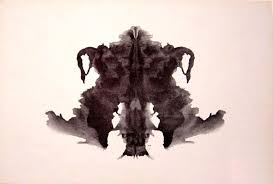 In my last blog, I had a little fun with an image of the kind used in a Rorshach test. In a session with a psychoanalyst, one would probably get a number of these to interpret, but I just included one that struck my fancy. And then I invited subscribers to share what they “saw” relative to the “Time of Trump,” so to speak. Here are the responses–anonymous, unedited except for typos, divided between male and female and including both conservatives and liberals. Here you go:

So there you are. I chose this inkblot from a wide selection, and I forget why this one caught my eye. In each one there was symmetry because of the fold down the middle, and one could turn it upside down and sideways to alter perspective. It’s interesting in these responses, however, to see the three themes of power as in simple bigness; sex as in male and female sexual organs; and danger as in the dragon, the “demonic” motorcyclist, and the wild hog imagery.

Interesting how sexual issues hover around President Trump. If the inkblot had been juxtaposed with the administrations of Presidents Nixon, Reagan, or Bush (choosing Republicans), would that have come up? As I studied the comments, I realized that I’ve long thought of Republican politicians as twin-bed people.

With many voters, Trump may have manifested as the archetype of the hero, and psychoanalysts would probably discover a lot of themes in mythology to go along with that. Maybe the entire country should go into psychoanalysis. That would be very interesting certainly, helpful to the political parties maybe. Is it time for a new party? Getting kind of bored with the old two.

And with regard to my current focus on the feminine relative to President Trump, I discovered something just recently that significantly altered my perspective. It is requiring me to do more research and to rethink before I proceed. However, I will be back, my original goal still firm. Sweet dreams in the meantime, but you might want to analyze the symbolism.

One Response to “The Time of Trump Bears Down”