“If you get into a fix, just let a little air out of your tires.”

Does that sentence sound like a life lesson in the works? That idea didn’t occur to me while I was interviewing brother Biggy for this post in Clint, Texas, but it did on the drive back to El Paso. Now for a few details.

My brother’s name is actually Wiley. Biggy is a nickname I inadvertently gave him as a child by repeatedly noting how he kept getting to be a “bigger boy.” Then he became Biggy Boy. Then Biggy. To family, he will always be Biggy. 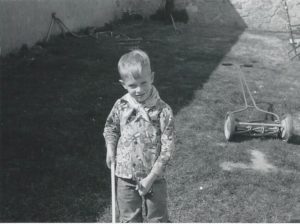 I’m very proud of my family for a variety of reasons, but there is a lineage of wonderful storytellers in the group, and my brother carried on the tradition in the El Paso wing in our generation. My two sisters and I can also tell stories, but Biggy’s have been exceptionally colorful due to his career as a veterinarian and to a lifestyle that included a lot of time with cattlemen and friends hunting, fishing, and exploring an aptitude for various forms of risk-taking.

Those tales could make a book, and if I lived in El Paso, I would be working on an anthology. However, during a mini-family reunion last weekend, I was determined to get him to sit down and tell at least one for my blog, which he did.

THE MORNING OUR LIVES CHANGED

Before I proceed, however, I need to share an event that altered the shape of Biggy’s life in particular. Our father died unexpectedly when Biggy was 14 years old. My oldest sister, Ann, was 18 in her first few weeks at college. I was 16, and my youngest sister, Kate, was 12. Our father had been in the hospital for surgery for stomach ulcers, and he had died during the night. Each of us learned about his death in a different way, and I heard my mother telling an uncle about it on the phone as I still lay in bed the morning after his death.

Our father, a wonderful man, was dealing with this illness even before he married my mother. Probably as a result, I remember the obligation to “be good,” to excel in school, and to take care of our own stuff. I don’t ever remember a finger wagging in my face, but I just knew. We all did.

After our loss, though, I think things were more different for Biggy than for the girls. His model for how to become a man was gone.  I remember that the morning the news broke, he got out the lawn mower and walked up and down our big yards mowing for a long time. I’m not sure they needed it. 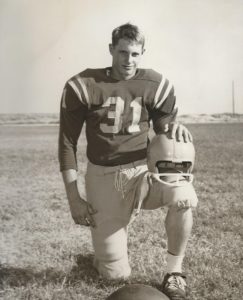 So, how to be? And our situation was a little unusual. We had moved to El Paso from Louisiana when we were all little, and at my father’s death, we were the only Heaths in Texas. All our relatives, except a great aunt living in New Mexico, were still in the South. We were a bit isolated in a way, but especially Biggy in that he had no male cousins, uncles, or grandparents around to help him get his bearings.

He was a fine athlete, however, very popular, and had many buddies. The father of one of his friends, Mr. Keeler, owned country property near Columbus, New Mexico, and soon Biggy was spending a lot of time there in the summers. Mr. Keeler taught him to drive a tractor and his first truck.

One of Biggy’s jobs on Mr. Keeler’s farm was to help with irrigation, which meant manipulating these 2″ tubes to release water equitably on about 75 rows planted with milo. This meant getting up in the middle of the night to check the flow periodically, and he remembers accidentally letting things kind of flood once. Things happen, and the following story is another example.

On the day in question and at about age 16, Biggy set off from Columbus in his truck and headed home to El Paso. He hadn’t had breakfast and decided to take a shortcut east on a road close to the Mexican border. Sometime before noon, the road split, and he chose “the one less traveled by,” as Robert Frost wrote. As it turned out, it was a dirt road running right along the barbed wire fence separating New Mexico from Mexico.

There came the point when it descended into an arroyo, and as he tried to drive up out of it, Biggy got stuck in deep sand. He hadn’t seen anybody or anything for miles, but he decided to walk on down the road after retrieving his 22 rifle and a canvas water bag. After a couple of miles, he decided this wasn’t working and turned around to head back to Columbus.

There was a defunct old railroad track running west, and he had helped remove some of the ties, so he decided to walk along the bed. By sundown, he hadn’t seen a living soul. As it got dark, a storm came up, and it began to rain. Biggy happened to have a tea towel with him and wrapped it around his bare arms to try to keep warm. The sky was covered with clouds so he couldn’t see stars or a moon. It was pitch black. What if he stepped on a snake?

And then in the deep dark of the void, as they say, he began to remember monster movies he had seen as a child. When he was recovering from having his tonsils removed, my parents had rented a TV to entertain him, and he had tuned into some really scary movies. He has a vivid imagination and had thereafter been troubled by nightmares occasionally. Now in a darkness so perfect that he could see nothing, he sensed a monster moving in behind his back. He needed to get a grip. “There ain’t nothing out there,” he told himself. He decided he would turn around once. If nothing was there, nothing would ever be there. That worked.

Finally, he decided to lie down and go to sleep, which he did. At one point, though, he was awakened by something sniffing his ear. When he sat up, it ran off. He walked some more then lay down and slept until daylight. Eventually, he found the road he should have been on all along, and after he had walked a good 30 miles or more on foot, an Hispanic family pulled off within two miles of Columbus and gave him a ride to a filling station in town. He immediately bought a Dr. Pepper and a fistful of Snickers bars, not too interested in healthy nutrition at the time.

He called Mr. Keeler, who came and got him and drove him back out to the truck. “If you ever get into a fix,” he said, “let a little air out of the tires,” which he did. Sitting in the truck, Mr. Keeler rocked it back and forth from the inside, then gassed it and drove it up over the bank. In parting, he told Biggy he had enough air in his tires to get to El Paso but to be careful. Fortunately, Biggy hadn’t told our mother he was coming home, so she wasn’t worried. He pulled into the driveway with his tires full and a good story. 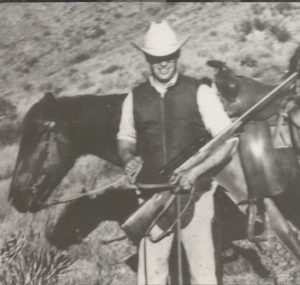 Of course many more stories followed as Biggy made his way through life in the absence of a guidance system like we girls had, our mother always present as an inspiring example of how the feminine could and should excel according to convention. But Biggy would continue to learn all along the way from the men he encountered in a much more free-ranging life.

The next and most important mentor was Dr. Nickerson, the father of a friend of mine, whose skill as a veterinarian initiated Biggy into the same profession. Back in El Paso this weekend, Biggy shared another story about a very dangerous moment–like many others that he will never forget–while working on a horse in a paddock. That will be the topic of my next post.

10 Responses to “The Toll of a Shortcut”