It was a voice from the past, that of a brilliant friend from high school and college, who wrote me from Berlin about my error. The introduction to my last post, “Did you know that St. George, the patron saint of Great Britain, was a Turk?” was a real attention-getter as she put it—just incorrect.

“Curses!” I hate making mistakes. So back to history and the maps. Better research reveals that St. George, of Greek roots, served as a Roman soldier in what was known as Asia Minor and died in a place called Nicomedia. The site is southeast of Istanbul in today’s Turkey, but nevertheless. . .

So where did he actually kill the dragon? I cited Libya, which is geographically accurate according to the story, but Libya didn’t exist back then either.  And to get even more technical and since dragons aren’t real, it couldn’t have happened anywhere, could it? We love this story, so nevermind.

The whole subject of research is timely, however, and mine will be improving. My set of DVDs on “Great World Religions” has arrived. Ignoring chronological order, I have begun to watch the 12 lectures on Islam by John L. Esposito, Professor, Religion and International Affairs and Islamic Studies at Georgetown University. He is the founder and director there of the Center for Muslim-Christian Understanding.

The Great Courses feature the most outstanding professors in their fields from all over the world, and Dr. Esposito reminds me of the best experiences I ever had in a college lecture hall. A Catholic himself, he is intense, in complete command of his material, and obviously dedicated to relating the history and the core beliefs of Islam as objectively as possible. Of course, this can get you in trouble with set perspectives.

But what a wonderful resource to dispel the rumors, the fears, and the anger caused by inbred prejudice and inaccurate information regarding this religion. I have seen this in myself at times, and I believe that when I’m done with this, I will go forward  much better informed. But why bother?

As I wrote earlier, Islam is on the move. Based on the demographics analyzed by the Pew Research Center, it will probably grow faster than any other religion over the next four decades and number about 2.8 billion adherents by 2050. This compares with an estimated 2.9 billion Christians. In the United States, Muslims will probably outnumber those who identify as Jewish.

Of course my generation will not be around to see how all this works out. However, to abide in a state of ignorance about a religion that may very well transform the world seems irresponsible. After all, many of us have the luxury of time to study this, to try to find out the truth of this story, this history. 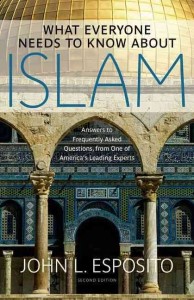 Ignorance is bad, and we are all vulnerable to it in an era when the news media, social media, and the Internet—as I have just illustrated with my own inaccuracy—can lead us into error. What is needed is the commitment to provide some degree of  intellectual ballast in the national conversation on Islam and the turmoil in the Middle East.

So my plan is to share a little of what I learn along the way, but I feel comfortable about recommending Dr. Esposito’s book, What Everyone Needs to Know about Islam. And beyond this topic, there is the gift of The Great Courses themselves, where DVDs and CDs give us access to a priceless wealth of knowledge in practically any field imaginable. Depth, you know, during the reign of sound bites that only munch at substance.

One Response to “The Truth about Islam: Why Bother?”