Sometimes it takes a visitor from a foreign country to notice that a revered national monument is disintegrating. That happened earlier this month at a lecture sponsored by the C.G. Jung Institute of Santa Fe.

My impression of the audience at these regular lectures is of a room full of fiercely intelligent and learned people who can be combative on occasion, and that was the case on October 5. The title of the lecture was “Whatever Happened to America? Truth, Justice and Order in Ancient Egypt and Post-Modern Life,” and it was delivered by Wynette Barton, Ph.D., visiting from Texas.

Dr. Barton’s overriding point was that the Egyptian civilization endured for about 3,000 years due to a conviction that truth is embodied in the natural order of the universe and should be revered. To what degree an Egyptian had known and lived the truth would be revealed by weighing the heart against a feather on judgment day. A heart heavy with failure would not entitle the deceased to be one with the gods, meaning one with all. 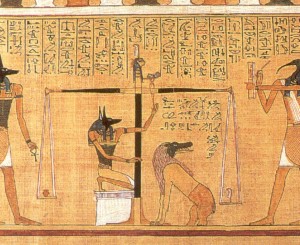 Anubis weighing a heart against a feather

Dr. Barton’s description of Egyptian mythology, which I have brutally summarized, was fascinating. However, at the conclusion of her comments, the audience relentlessly probed for the application to the situation in America, and great frustration with the status quo was manifest. The high point of the evening came for me when a woman from Switzerland raised her hand to speak.

She began with brief and gracious praise for the United States, but then she shared her observation that the problem here is that we cannot acknowledge our shadow. According to Carl Jung, the shadow is that aspect of the self that we deny and often fearfully project onto others. As soon as the woman spoke, it seemed that a current of recognition swept through the room and then almost a collective sigh: “That’s it. That’s it.”

Members of the audience began to enumerate ways in which the United States has dishonored our expressed ideals both at home and abroad. The point was made that we don’t want to take a look at the truth because it is very uncomfortable and to speak it can result in being called “a traitor.” The Swiss guest had revealed that our monument to ourselves, that idealization of who we are and what we stand for, is moving toward ruin.

I keep thinking about that conversation as the election nears, and one truth that we’re having an awfully hard time facing is the fact that democracy in this country is simply not working as intended by our founders.

For one thing, the leadership we need is forestalled by the fact that we won’t elect a candidate who dares to discuss uncomfortable truths. For another, democracy has turned into a barter system in which voters of all parties appraise candidates alike: “Tell me what you’re going to do for me.” At the same time, we fret that government is already doing too much.

And finally, our system has been corrupted by money. For example, Mayor Michael Bloomberg of New York, who is a billionaire, is going to be investing $10 to $15 million in the campaigns of Republicans, Democrats, and Independents according to three priorities: banning assault weapons for private citizens, legalizing same-sex marriage, and overhauling schools in his state. I may agree with him on all three issues, but democracy is not supposed to work this way. You’re not supposed to be able to buy outcomes.

My personal pet peeve is the way television has undermined the democratic process by turning it into theater. Candidates have to be media stars, and the way they look and gesture, their tone of voice and accent, physical conditioning, sense of style, etc. have become way too important. Abraham Lincoln with his squeaky voice and craggy features wouldn’t have a chance of winning today.

And getting plenty of media attention is essential to success. Being attractive and having the quick wit of a talk show host works at times, but being uncooperative, disruptive, combative, insulting, and derisive is even better, because the media love conflict. If you want to be on the screen, create problems. Solving problems gets you nowhere.

At one point in the Jungian lecture, a member of the audience voiced the need for revolution. Another was frustrated by the overwhelming flow of information, much of it inaccurate, misleading, and inflammatory. I glanced around at the troubled faces in the room full of intellectuals and could not imagine anyone marching in the streets or throwing rocks. I could, however, imagine them reaching for the remote control and powering off.

That would be a real revolution—the overthrow of television media influence. And my reasoning is this, lifted from a quote by Dr. Barton: “Great truths,” she said, “come from self-understanding.” You cannot get to that place with images continually flashing in your face and voices yammering in your ears. You can only get there through silent contemplation of the best, most objectively written journalism you can find anywhere and through acute attention, on the ground, to the physical reality in which you live. The “self” to be understood in this case is our national character, and the “great truths” that will emerge are the ways in which we need to fortify it.