As I sat down to write, I wondered, “How can I frame the contemporary value of shamanism?”

And with regard to the question above, I have to say that I am not an expert in this matter. There are shamans. There are shamanic practitioners. And there are dabblers in shamanism like me. I guess I’m a dilettante. Many things interest me and I keep moving, but my experience with shamanism has had a powerful and enduring impact.

As I wrote previously, it turned on some kind of psychic software I didn’t even know I had. The result was the development of a spiritual relationship with the natural world, and that has been a great thing.

Although we humans imagine ourselves towering over all other life on this planet, we are completely dependent on its abundance, even if it comes to us in a plastic wrapper at Walmart. And what I learned through shamanism is that the natural content of that wrapper may also be ensouled and animated, able to communicate at its source if we would only pay attention.

I discovered this through the identification of Lizard as my power animal. In his book Animal Speak, naturalist and mystic Ted Andrews explains that “A lizard has an ability to recognize the subtlest insect movements, and it can remain still or relatively so to mislead its prey or protect itself. This indicates that your intuition and psychic perceptions are either already active or about to be activated more strongly. Pay attention.”

My guess is that anyone interested in discovering what his or her power animal is would recognize a significance, some kind of guidance in its way of being in the world. However, any striking encounter with a creature in the wild can be meaningful if you do a little research. My first experience with this is a great example.

Early on in her life with us, I often took our Samoyed, Cassie, for a morning walk in a nearby nature preserve in Nashville. One day as we were heading back to my Jeep, she suddenly leapt for the tall grass along a wire fence. Knowing that such eagerness could mean trouble, I grabbed her by the collar and pulled her away.

What a sight! Pale underbelly exposed, a mole lay on its back, possibly in shock, a long earthworm coiling out of its mouth. I loaded Cassie into the Jeep and then returned to help the mole if I could. As I reached down, it flipped over and disappeared into the grass. The worm was nowhere to be seen.

This image was a quantum leap from just seeing a regular old mole. From Ted Andrews again, I learned that they can lead shamans into the Underworld to find treasures of insight and guidance. The mole digs and tunnels and feeds on the earthworm, which also digs and tunnels. As a result, the dramatic dual appearance could be taken as guidance to study, explore, and analyze the teachings of the earth itself. Later, I would learn that the Roman naturalist Pliny, who died in AD 79, recorded that magicians preferred to use the intestines of moles to divine fate. Who knew?

In fact, it seemed that divination was afoot from the very beginning of my daily walks with Cassie in beautiful, wild environments. As I have already said, her breed originated among the shamanic Samoyed people of Siberia, and she became my guide in the natural world. She taught me how to observe, and that seemed to cause interesting things to manifest.

The forests around Nashville were the most animated, the most populated with healthy wildlife that I’ve ever known. One morning as we walked, I imagined this welcoming intelligence like a voice saying, “Good, we’ve got a live one.” And then, “Would you look at this!” 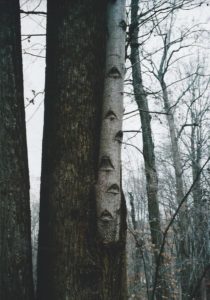 Life was complicated, and Cassie and I ended up walking thousands of miles in beautiful settings in four different states. During about the last three years of that time, I knew we were traveling a path toward a symbolic gate through which I would leave one life and begin another. Distraught by the impending decision, I sought clarification of the issue in nature, and I saw it in many ways and places.

For example, one day, I noticed the symbolism in a pair of trees growing too close together. A slender aspen had been subsumed by the trunk of a much larger species. The lip-like marks of its growth seemed to call “Help! Help!” There was indeed a voice in the woods, and I was changing as I worked with its teachings.

My husband and I were both committed to personal growth but in different ways, and our paths were separating. This reminds me of the last stanza of Robert Frost’s poem:

Two roads diverged in a wood, and I—

I took the one less traveled by,

And that has made all the difference.

So after 18 years of marriage, and in spite of consternation on all fronts, I jumped the traces of convention to begin a new life in Santa Fe. Cassie and I loaded up in Birmingham, Alabama, on Thanksgiving Day in 2005, my family all elsewhere. I drove north first to Nashville for one last look at where our story had begun and to pick up I-40 heading west. We traveled light, bound for many challenges inspired by both ideals and ambitions but also buoyed by the joy of being able to construct an authentic life.

On a very down-to-earth level, in the trunk of my Prius was a container of composting worms I had begun to cultivate years earlier. The idea was to turn garbage into “black gold” that would help enrich the soil of a depleted planet. After 13 full and fascinating years, I haven’t made much of a dent in Earth’s problems, but I’m reassured by her wisdom. If Lizard were to speak for her, I know what he would say: “Every worm counts.”

In my next blog, I will share some of his wise and often very funny instruction.

2 Responses to “The Voice in the Woods”