If you pay attention, the natural world can inspire some very deep thinking. 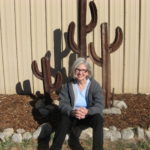 I’m attaching my photo to the left to illustrate how invigorated I have been, both physically and imaginatively, by weekend visits to my sister Kate’s country place.

We’re all responding differently to this time of constant and unsettling change, and I seem inclined to seek guidance in the natural world. In a recent post, the focus was on the discovery of how corn, beans, and squash create community that enables all to flourish. In the moment, my attention has shifted to the monarch butterfly. 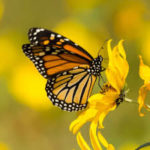 My interest was initially awakened by a friend who lives not far from my sister’s home. In response to my comment about the need to restore our environment, she said she was going to be planting milkweed in the spring to help sustain the monarch butterfly. By coincidence, several newspaper articles on the monarch immediately caught my eye.

I learned that there has been an ardent national campaign to protect it under the Endangered Species Act. The devotion it has inspired probably results from the combination of its spectacular beauty and its annual migration. This is a 3,000-mile journey it takes from the northeast to Mexico where it can safely overwinter. None make a round trip, so it’s a mystery how they know where they’re going.

Alarm is rising due to threats to the monarch’s survival from pesticides, climate change, and shrinking acreage of milkweed, it’s primary food source. However, the U.S. Fish and Wildlife Service recently declined to add it to the endangered species list because it has to set priorities. After all, according to Statista, there are currently 1,275 species of animal and wildlife at risk of extinction in the United States. 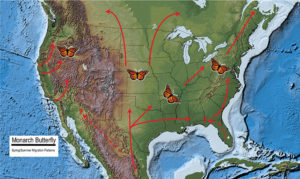 I’ve seem monarchs several times in Santa Fe, but I don’t remember the time of year. It could have been the fall when milkweed was dying out and they were headed south to winter in Mexico. Or it could have been the spring when winter survivors were heading north to mate and breed. California is a popular destination as well as states in the northeast. You can see from the map of spring flight routes that New Mexico is not a favorite destination. Nonetheless, Kate has framed two specimens she found while walking along the highway. 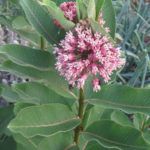 The threats to the monarch’s survival have inspired me to plant milkweed in my own garden next spring to support a safe journey in either direction. That seems to me a fun project to share with children, and I can imagine the excitement when the first monarch appears. In a subtle way, it might serve to put them in touch with our own challenges in a rapidly changing environment. 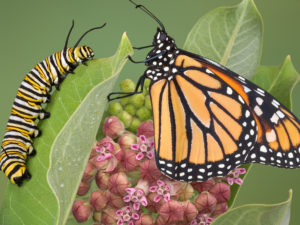 The beautiful monarch butterfly emerging from the striped tube of its caterpillar is a wonderful example of transformation. And all the dangers erupting within human civilization suggest our need for the like, meaning a collective rethinking of how we inhabit the earth and how we can evolve upward, let’s say. To think that this will happen gracefully would probably be naïve. I learned this from an experience years ago when I decided to share a butterfly learning experience with three young children.

HOPE IN THE IMAGINAL

One of my early pleasures in an 18-year marriage was finding ways to entertain three wonderful stepchildren, two girls and a boy, when they came to visit. A memoir I published back in 2001 contains a chapter, “The Butterfly House,” on my questionable decision to set up a butterfly-hatching kit in the kitchen for the children’s edification. (It didn’t hatch monarchs.)

It wasn’t a very successful experience, in part because things got messy. I wrote that “The process left hemorrhagic pink stains inside the butterfly house as well as the energetic residue of desperate struggles out of the chrysalis. And the last butterfly to emerge seemed weak and unfinished, a reminder of the hazards involved in transformation.”

Apparently, however, the butterfly’s transformation is inevitable. I learned that the blueprint for it lies in clusters of cells called imaginal buds. When they start to grow, the caterpillar begins to disintegrate. Hmm. Is it possible that humanity has such?

I know that we, as humans, are kind of attached to the way we are, the way we look, our big brains, our drive, our sense of superiority over all other living creatures, etc. But what if something even more wonderful were possible, something embedded in a cluster of cells whose potential, whose true mission has yet to manifest. I mean, are we “done?” Or is the chaos afoot akin to the disintegration that precedes transformation?

Just a thought. Amazing how studying the natural world inspires that.

4 Responses to “The Way of the Monarch”