Whether we are aware of it or not, things coming in threes have a special impact on consciousness.

The perspective of my last blog had been of the masculine sitting in the cat bird’s seat, looking down at the feminine with disdain, fear, and lust. But the news kept rolling in.

A shift in attitude began through a conversation with my brother-in-law, Paul, regarding his supportive comments on my post. He brought up the rising tide of news on sexual assault within the military. The media is currently focused on the Air Force, and an old memory surfaced.

Probably because of the association with wings and warfare in blue skies, the Air Force has always enjoyed special standing. When I was selected during my senior year in high school to attend a country club event with cadets from the Air Force Academy, I was pleased. I had been admitted to Stanford University by then and felt as though I were soaring myself. However, the feeling soon vanished that evening. As we stood outside the club’s party room, the invitees were told that the cadets in their handsome uniforms would be lined up on either side of our path down the middle of the room. As we passed by, they would claim the young women who attracted them.

As I set out, I remember feeling, “This can’t be happening.” I had no intention of batting my eyelashes at anybody and walked between the rows, eyes fixed ahead. All I wanted to do was go home, and the rest of the evening is a complete blank. Of course adults from the high schools and from the Academy had set this up, and one must wonder where their brains were. I don’t remember telling my mother about the humiliation. My father had died a couple of years earlier, and the entire family was in this mode of  “Get it done and handle things yourself.” I just accepted it as the way things were.

So poor me. Poor us. However, the impact of the memory Paul elicited was soon murked up by attention to the news in play.

He and I had discussed the Pentagon report estimating that 12,100 of the 203,000 women on active duty have experienced sexual assault in the past year.  At the same time, however, it reported that 13,900 of the 1.2 million men on active duty reported abuse. What? Men are being sexually assaulted in the military?

This is one of those details that rocks one’s world view, and the problem is probably much worse than these figures reveal.  Only about a quarter of the service people who received the survey responded to it, and victims often won’t tell. They may be in denial, think admission pointless, or fear some form of reprisal. I can imagine men being especially reluctant to share.

So what is going on? With regard to the men, are there more aggressive gays in the military than we knew or does isolation from the feminine sometimes trump natural sexual preference? Have women achieved such ranks that they can demand to be sexually serviced? Does the military have a culture that fosters a unique form of the abuse of power? After all, the policy of letting a commanding officer decide whether any transgression will suffer consequences elevates expedience over justice.

Does this happen anywhere else? Ah, yes. The Church. The local paper announces today that six more men have come forward saying that they were molested as children by a priest who died in 1993. The attorney for one of them commented that it is now clear that victims are spread over half the state of New Mexico. In many cases, media attention has triggered buried memories that brought the victims near to emotional collapse.

One’s heart aches for them. When these stories about children come to light, the male and the female seem equally helpless. Inequality between the sexes leads to greater victimization of the feminine overall, but it is clear that things are not good for anyone.

I will write more on this subject later, but I will close today with another hot news story. This is the one about  the three women incarcerated by the man in the shabby house in Cleveland. Bound with ropes and chains, separated from each other, and repeatedly raped, they endured their imprisonment for ten years. Could there be a more vivid image of the disenfranchised feminine? 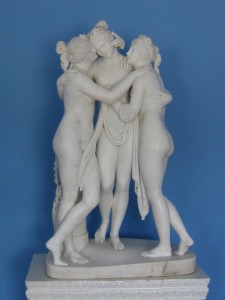 The Three Graces in Greek Mythology

As I wrote earlier, three is a number freighted with meaning. We think often in terms of threes: Past, present, and future. Beginning, middle, end. Body, mind and soul. And the triangle formed by three equal sides powerfully evokes balance as it points upward, which is also symbolic.

So think of all the threes afoot here–the three news stories about sexual assaults on men, women, and children all three; the three women in ropes and chains; and the coincidence of substance, symbols, and timing all three. Whether we are aware of it or not, things coming in threes have a special impact on consciousness. And there is something comforting , grounding, and hopeful about the symmetry.

In conclusion, although the story could have turned out tragically, we are now celebrating the freedom of the three ladies in Cleveland. A new and better life is beginning for them. With more work on balance and equality, we could all have that.