The dome of the U.S. Capitol is undergoing restoration because it is suffering from rust damage. How symbolic is that?

All right, I’m back again with the theory that we could be looking at the beginning of a new era of unprecedented and growing feminine involvement in government. Now why would that be good? 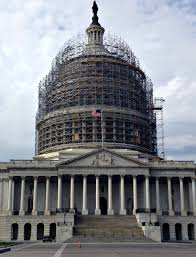 Let me say at the outset that I recognize the danger in generalities, and both sexes have a wide range of attributes. My thought, however, is that some fresh thinking is needed in governance and that women are very competent to provide that. And why would the thinking be fresh? Well, we’re really different, aren’t we, in our very brains?

I got this idea from a friend who is a retired professor of biology. One day he commented on research indicating that extreme use of global positioning systems (GPS) is causing atrophy of parts of the hippocampus associated with memory and spatial relationships. When you stop and think about it, the feminine mind has throughout the history of civilization had a rather specialized focus. This has had a lot to do with nurturing and care taking, as in the home. With regard to Congress, the work on the rusty dome suggests that some housekeeping below would be very timely.

Consider that when the Constitution was approved, the total population of the country was about 3.9 million. Today it is around 317 million; and as one state after another was created and the population burgeoned, so did the complexity of governing. Women had no part in this until 1916 when Jeannette Rankin of Montana won a seat as a Republican in the House of Representatives. Women weren’t allowed to vote in federal elections until 1920. However, we were voting in some fashion in about 40 states before that, including Montana. That must have helped Jeannette get elected. 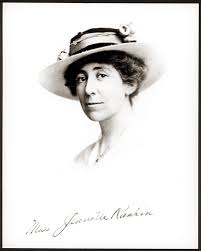 So this is the larger perspective. Although the Founding Fathers are idealized, they were very short-sighted with respect to women. Since they failed to provide for our representation in Congress, and even though we are half the story of this nation, the shape of the government everyone is so displeased with was created basically by men. Altogether, 12,174 people have served in Congress, and only 313 have been women. No wonder the institution is such a mess.

“So what are the most important problems?” you may ask. Suppose we accept the basic theory that government has gotten way, way too big. Perhaps it’s time to cease evaluating Congress on how many laws are passed each two-year session. How about paying attention also to how many bad laws are being repealed or modified to correct errors or unintended consequences? This may not make the media slurp, but it is the kind of cleanup detail that appeals to women.

And most important, how about cleaning up the tax code? Everybody thinks it is too complicated, unfair, and amenable to evasion, which is true. Let us assume that every provision was originally well intended but is now part of a complex beloved only by accountants. To use domestic symbolism, each tax law passed was like a piece of fabric used to create a patchwork quilt. Now after over 200 years of stitching provisions together, we look at the quilt and think “This is ugly. This is really ugly.” It’s time to start unraveling to create an attractive, geometric pattern that will fairly collect the funds needed for services that cover us all. Maybe this sounds boring to men, but women are good at this kind of thing.

And what about the procedures of Congress itself? Money and lobbying have corrupted the entire legislative process, and means must be found to protect members from undue influence. Maybe we need to look again at public financing, and that sure would enable more women to get into Congress. And with fundraising among the privileged now well underway to influence the outcome of the 2016 elections, one can scent already the stench of the impending influence of wealth. A potpourri of rationalization isn’t going to disguise it. We need to eliminate the source of that smell.

There are procedural changes that could also make a big difference. What about figuring out some way to prevent unwanted riders from being attached to urgent  legislation? What about figuring out some way to send pork barrel bills back to states to fund themselves? One way to prevent government from continuing to grow out of hand is to consider redefining federal responsibility. Speaking for Congress, women might be able to provide for the polite response to supplicants back in their home states: “I’m sorry, honey. This is a lovely idea, but according to the 2016 Clarification of Purview Act, it is a state issue, not a federal issue.”

Now let’s consider environmental issues. Women have played the traditional role of keepers of the garden, not only for food but for beauty. Concerns about the food supply and the well-being of the natural world and its creatures are on the rise; and women, from the time of the ancient goddess religions, have been  associated with earth-consciousness. We have been blamed for ejection from the Garden of Eden; now perhaps we can get some credit for a return.

The possibilities are endless and also exciting. And although I have focused on our gift for detail, women in Congress have also proven their ability to be powerful, high-profile leaders. For example, Senator Dianne Feinstein (D) has forced us to look at potential human rights violations in the way we interrogate prisoners. Senator Kirsten Gillibrand (D), Senator Susan Collins (R), and Representative Niki Tsongas (D) have been the foremost champions of investigating sexual assault in the military. Back in 2013, three Republican Senators–Carol Collins, Lisa Murkowski, and Kelly Ayotte–constructed the compromise that prevented a government shutdown.

So there is clear evidence of the ability of women to polish up the image of Congress. The challenge is huge and will take time, but we’ve had a lot of experience with housekeeping. We know how to get the job done–one dust bunny at a time.