A connection is afoot. In this wonderful book I’m reading by Andrea Wulf (The Invention of  Nature), the great Prussian naturalist, Alexander Von Humboldt, and English evolutionary biologist Charles Darwin met in print on the same day (November 23) that Rainbow Lorikeets appeared on my Audubon calendar.

Humboldt believed in connection on a much grander scale. As I wrote in an earlier post, he developed the concept of the “web of life” with strands that connect humans with every living thing on Earth. This perception came to him through his intense studies of the natural world and geology as he traveled through the Americas beginning in 1799 at age 30.

A great admirer of Humboldt’s works, Charles Darwin, who was primarily interested in natural history in the beginning, embarked on a similar journey aboard the Beagle in 1831 at age 22. Like Humboldt, he traveled for almost five years, but this time around the world. Also like Humboldt, he returned home with a concept percolating–that of evolution.

THE TEACHING OF THE FINCHES

Darwin had soon focused on the possibility that change in the natural world inspired adaptation and thus evolution. A turning point came when he discovered that there were four different species of finches on four different islands of the Galapagos that had a common ancestor. Darwin concluded that the differences in the four species had evolved from adapting to different island environments. 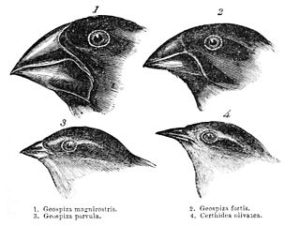 The idea of evolution was disturbing to many religious people. Had God made a mistake with the common ancestor, correcting through improvisation? Was he continuously active among wildlife, correcting other mistakes? Many scientists found this idea disturbing. That brings me to my calendar. 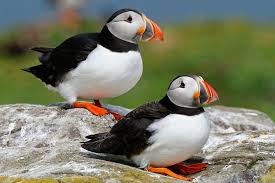 I had actually been thinking about evolution on a daily basis since the first of the year. Inspired by several avid birder friends, I had acquired the Audubon calendar with new birds six days of the week. I didn’t go into any depths on them, but I was amazed by the variety from the funny-looking puffins to the charming Tufted Coquette. 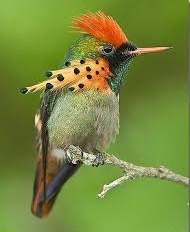 My view was exalted, of course, as a member of the species with “dominion” over all living creatures. Day after day, I wondered about details. Why that huge beak or the lavender feet or that bristling golden crown? What stimulates the brain, presumably, to send instructions to be so creative, and why?

And then came November 23 and the image of the Rainbow Lorikeets. From my lofty perch, I went critical. Go back to the top of the page, and you will see that the Lorikeets’ colors are bright, but that orange muffler is too big. The chartreuse stripe on the back of the head makes no sense. Why the murky, blue-black breast? It looks dirty. Surely God wasn’t responsible for the deficiency in aesthetics.

My mind traveled on to the Birds of Paradise where the female bird rules the roost. Perhaps because there are no serious predators in New Guinea, the males devote all their time to creating the beauty and the performance that will inspire the female to mate with them.

There is a wonderful documentary on Netflix right now, “Dancing with the Birds,” that illustrates the lengths male birds will go to for the triumph of about a one-second mating session. If you don’t have Netflix, you can watch the trailer at the YouTube video here.

It gives you pause, doesn’t it, to see what incredible creativity emerges from seeking feminine approval? This stands in contrast to what sometimes seems like the ebbing human condition (see my previous post  on the worldwide epidemic of “diabesity”) and to the deteriorating state of the planet that Humboldt foresaw back very early in the 19th century. Perhaps the human female could make a major contribution to correction.

THE CRUX OF THE MATTER

Humans have basically overpopulated and are over-consuming, so to speak. The Global Footprint Network reports that our species currently consumes at a rate 1.7 times what Earth’s regenerative systems can sustain. Andrea Wulf writes that English economist Thomas Malthus, a contemporary of Humboldt, had gloomily predicted that “human populations would grow faster than their food supply unless ‘checks’ such as war, starvation and epidemics controlled the numbers.”

What if the feminine could play an important role in creating a different kind of check? And could this serve to advance human evolution? I’m thinking of the collective assigning both the authority and the responsibility to the feminine (as well as the masculine) to breed less often and more consciously for the benefit of all life on earth. Wouldn’t this further empower the feminine to cultivate gifts beyond breeding while also lessening the taxing provider role of the masculine? Don’t panic. Just an idea.

But really, it’s time to start thinking out of the box, right? I’m referring to all the conventions about the roles of male and female, the idea that the history of war must endlessly repeat itself, and the belief that there is power in numbers whether in government, religion, the military, or labor that supersedes all other concerns.

So consider this. We have certainly dictated the breeding of many other domesticated creatures so that their species have evolved with amazing beauty, strength, speed, and capacity. Through careful selection, perhaps we too could attain new heights in consciousness as well as physical and intellectual vitality. Perhaps we can thereby learn how to forgo the necessary checks to excessive population growth like war, starvation and epidemics. If doubt arises, just check out the wonders created by the bird brains in New Guinea.