Humanity can’t go on like this. But how do we need to change?

The idea of a pending dead end resulted from my intense study of “Of Viruses and Vectors,” the article by Deni Ellis Béchard that was the subject of my last post. The planet is in a perilous state largely due to the dangerous ways of a huge and growing population of rather self-absorbed humans (my point of view). Clearly, an awakening is needed, and that could result from tuning into the consciousness of the earth. She may be getting fed up with us.

Well, the popular reference to Mother Earth suggests resonance with the idea of a feminine persona and consciousness. And when our apelike ancestors first stood up on hairy legs an estimated five to seven million years ago, they did so in a beautiful and hospitable world that met their needs in the way a good mother would.

With this world currently in quite a mess, it is easy to imagine an angry mother in a children’s story: A very beautiful Mother Earth lives on a vast and gorgeous estate. Unfortunately, her children have been given too much freedom and have rampaged all over the property, damaging exquisite and abundant gardens and terrifying chickens that no longer lay eggs. Mother Earth has a meeting with her virus nanny and tells her to lock the children in their rooms and not let them out until they promise to behave.

This story sounds like material for kindergarten. However, it creates an image of humanity at the child level of development, suggesting that our potential is infinitely greater than what we have achieved so far. That may be kind of encouraging.

“So you’re saying the pandemic may represent a form of discipline?”

Yes, and even though COVID-19 seems to be ebbing, other pandemics may manifest. And Mother Earth may have mobilized climate change to discipline us as well. On the other hand, it could serve to challenge us in a way that could lead to an evolutionary leap. I learned this in a Smithsonian article about research on the East African Rift Valley. The archaeologists concluded that it was climate instability 320,000 years ago that led to developing new technologies and behaviors that enabled the people to adapt.

“So you personally think the earth is conscious?”

Yes, maybe, and I will explain.

As I have written earlier, I seemed to tune into this possibility many years ago on long morning walks in nature preserves with my dog. At first, I just paid attention to what Cassie found interesting. Eventually, however, I turned into an acute observer myself and began to take a camera with me to record interesting images. Sometimes they were simply vivid, but sometimes individually or collectively they seemed to deliver a message, as I wrote in an earlier post. And it seemed that the more attention I paid, the more often interesting things appeared for me to see.

My attention felt appreciated, actually. I was not only the observer; I was also observed. And the eye of nature seemed present both above ground and below. 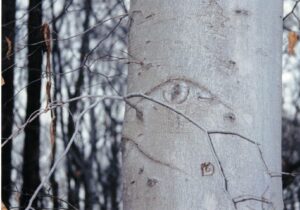 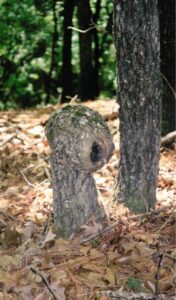 In my previous post, I wrote that Deni Béchard envisioned a planet “as wound up as a ball of yarn,” and the threads could represent the way that all of nature is connected. Certainly the indigenous people believed that this was the case.

To provide an example, I will return to a quote in the memoir Braiding Sweetgrass by Robin Wall Kimmerer that I wrote about earlier. A renowned biologist, professor, and member of the Citizen Potawatomi Nation, Robin wrote of her people, “We have always known that plants and animals have their own councils, and a common language. In the old days, our elders say, the trees talked to each other.”

And perhaps indigenous wisdom could be a valuable resource in trying to counteract a tidal wave of negative change. One example of that change was provided two years ago by the United Nations Environment Programme. Due to humans’ devastating effect on global diversity, apparently about one million animal and plant species are now threatened with extinction.

This would clearly alarm earth consciousness. It is reassuring in this regard that Kimmerer’s book about the perspective of native people has recently risen to second in The New York Times paperback bestsellers list. It may be that earth consciousness is stirring in more and more people.

The planetary peril afoot has to do not only with the pandemic, overpopulation, species extinctions, environmental deterioration, and climate change, but also with our fragmented civilization. There are so many ways in which we are divided: by boundaries, race, religion, culture, language, history, global ambitions, economic issues, and on and on. Violence is also continually erupting, as in the recent Israel-Gaza conflict; and media spread such news all over the world, serving to deepen the festering animosities among us.

It seems clear that it is time for humanity to wake up to our planetary peril. What is needed is a shift in consciousness, and there are signs here and there that this is happening, something I may address in later posts. But one perspective in particular is being cultivated by a number of spiritual leaders.

This is that everything on Planet Earth is of one Source. And with regard to the need of humans to address all the problems, I have recently encountered a new book by one of the spiritual leaders mentioned above. He proposes that we work together in partnership to address our challenges “Until we have all remembered that we are one.”

A shift in consciousness is the change we clearly need in order to mitigate the planetary peril afoot. This seems an improbable development  in the moment, but we’ve only just begun thinking about it. And its appeal may grow if we consider the possibility that it could result in an evolutionary leap that would lift our entire world.

Heavy. And there are many more related topics to write about in the meantime, but I will pause for now.