“My body is my journal, and my tattoos are my story.”
Johnny Depp

Last week, one of my friends at the gym commented that she was feeling a little tired. After taking a look around, I said, “I know what’s wrong with you. You don’t have enough tattoo ink in your system.”

The popularity of tattoos seems to rise daily in Santa Fe, and maybe it’s the same everywhere. I have been wondering about it, especially with regard to women. What about aging and the inevitable sags and bulges that will mar a design? Is this fad an ominous sign of a lost sense of future? Before going cosmic on this issue, however, I decided to do some research. The Smithsonian was my primary resource. 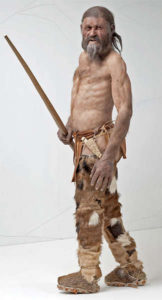 The oldest evidence of human tattooing resides in the mummy, “The Iceman,” also called Ötzi. His body was discovered in 1991, half frozen in a glacier in the Alps along the Austrian-Italian border. He had apparently been killed in about 3250 B.C. There were 61 tattoos across his body, but these were apparently not decorative. Studies have revealed that they were probably applied as therapy for degenerative joint and spine disease.

The earliest evidence of tattoos for symbolic purposes dates to around 3000 B.C. in feminine, Egyptian figurines. The first tattooed mummies in Egypt were also female, and they date to about 2000 B.C. The marks appeared on thighs, stomach, and breast, and it is deduced that the patterns were designed to keep women safe through pregnancy and childbirth.

The practice of tattooing spread all over the world, whether by the intersection of people or some mysterious creative commonality. It appeared in Greece, Crete, Rome, Persia, Arabia, China, and Japan. The practice was also cultivated by early Britons, the Danes, Norse, Saxons, Polynesians, and many more. In some cases, the symbols seemed protective; in others, they identified slaves and criminals; and sometimes they seemed solely decorative.

The Normans disdained tattooing, and after they invaded Britain in 1066, the practice disappeared from Western culture until the 16th century. It returned when two explorers, one of whom was Captain Cook, brought heavily tattooed Polynesians to London to exhibit. They created quite a stir, and in the late 1700s small tattoos in “discreet places” briefly became popular among upper classes.

Tattoos might have become more popular generally if the procedure hadn’t been so slow and painstaking. Often the technique included bundling needles or knife points to create larger designs. Greater access became possible in 1891 when an American tattoo artist named Samuel O’Reilly invented the first electric tattooing machine. However, the ability to get a tattoo at reasonable cost caused the elite to lose interest, and heavy tattooing became associated with freak shows, circuses, and the sleazier parts of towns. After the Depression struck, tattoo artists could make a living in the United States only in communities around military and naval bases.

Then with an outbreak of hepatitis in 1961 and subsequent alarm over other disorders associated with poor sterilization practices, the popularity of tattoos plummeted. New health codes also forced many shops to shut down. However, late in the decade a man named Lyle Tuttle began to restore the popularity of tattoos. He was media savvy, handsome, and charming and attracted celebrity clients and the interest of magazines and television shows. Tattoos were back “in” and have remained so ever since. 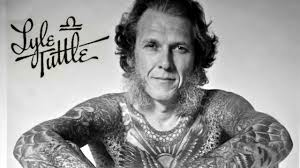 Here are some important points on the subject, gleaned from a site called “Random Facts.”

But why do people do this? Some subscribe to the philosophy of Johnny Depp, namely that it is a way of visually recording a life story. Symbols can be empowering as well as protective.  Along with tattooed messages, they can broadcast causes and allegiances. For some, tattoos are simply a form of artistic self-expression.

Although the medical community is not enthusiastic about tattoos, the inks now generally used seem to be safe, although some contain pigments from ground plastics that create brighter, more enduring colors. The primary danger lies in the potential for an allergic reaction or an infection from unsanitary equipment. Removal of tattoos is painful, expensive, and not very effective. Maybe that will become a booming business at some time in the future when some unanticipated development turns the tattoo into a serious negative. I am thinking of the discovery that some artists are aliens who are labeling individuals to be abducted for experimentation.

After doing this research, I nevertheless wondered if I should get a tattoo. After all, the appeal must be in my DNA somewhere, and maybe I’m not fully realized until I honor that history. I could do a lizard. When I explored shamanism, I learned that a lizard is my power animal. But where do I put it? Do I want the people at the gym to see it or not? I certainly don’t want to send out any false messages. And I need to consider a poll of the tattooed revealing that 17% had some regret afterward. Also, 32% became addicted to ink and only 5% felt more intelligent.

On second thought, I think I’ll take a pass.

5 Responses to “To Tattoo Too or Not?”