It is the simple observances defined in the Five Pillars of Islam that unite Muslims across time and space and distinguish Islam from all other faiths.

Before I turn to the Five Pillars of Islam, I would like to say that it has been my observation that the more demanding a religion is in terms of worship, ritual, rules, requirements of dress and diet, celebrations, offerings, etc., the more effective it seems to be in commanding the loyalty of its following. In this respect, Islam may well be more exacting than Judaism and Christianity ever have been. Ironically, the complex of obligations emerge from the exquisite simplicity of the core beliefs in the Five Pillars. 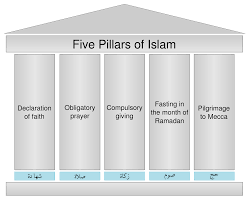 The first pillar is the declaration of faith: “There is no god but God (Allah) and Muhammad is the messenger of God.” According to Professor Esposito, whose lectures I have been following, Muslims who pray as required may make this declaration as many as 14 times a day. It is designed to do three things: establish Muhammad as a prophet, God’s final messenger, and the preeminent role model for a good life.

The second pillar requires Muslims to worship five times throughout the day: at daybreak, noon, mid-afternoon, sunset, and evening. Facing Mecca, the faithful recite prayers from the Quran in Arabic along with standing, bowing, kneeling, touching the ground with the forehead, and sitting. They can pray anywhere that is clean, and it is preferable to do this in the company of other Muslims. Once a week, they pray at noon at a mosque or an Islamic center.

The third pillar is the zakat or tithe designed to provide for the poor. It reminds Muslims that their wealth is a gift from God that they are obligated to share. The tithe is 2.5% of all wealth, not just income, and it is paid annually.

The fourth pillar is the annual fast of Ramadan, which occurs in the ninth month of the Islamic calendar every year, and the dates differ year to year. In 2015, it began on June 17 and concluded on July 17. During that month, Muslims who are physically able must abstain from food, drink, and sexual activity from dawn to sunset.

The fifth pillar is the pilgrimage or hajj to Mecca to worship at the shrine believed to have been established by Abraham and Ishmael. (The link is to a video.) Every Muslim who is physically and financially able is required to make this pilgrimage once in his or her lifetime. The number of believers who do so annually is now about two million; and the five-day event, which began on September 22 this year, involves numerous rituals throughout the surrounding area.

So now I will circle back over the Five Pillars with my modern, feminine mind, and I have to warn readers that this study has been so intense that I need to relax with a little humor.

The Five Pillars from a Modern Perspective

With regard to the first pillar, the daily declaration of faith, I cannot help but note the ego behind the requirement. Among men preoccupied with power and the creation of a legacy, there must be grudging respect for Muhammad among non-Muslims. After all, millions of people worldwide are at this moment speaking his name reverently and will continue to do so at regular intervals throughout the day. And this practice began in about 610 AD. This is huge in the realm of making a name for yourself.

With regard to the second pillar, the requirement to pray five times a day, I begin to have trouble breathing just thinking about it; but then I wasn’t raised a Muslim. It must be easier to do in the Middle East, but apparently Muslims who have moved to the West will interrupt meetings, stop on the street, and pause in an airport or virtually anywhere to fulfill this obligation. All the new technology provides reminders. It must be stressful for devout Muslims moving to the US to learn of an additional obligation–to go shopping at least five times a day to fulfill our belief in perpetual economic growth.

And then we come to the tithe. In the beginning, governments collected it, but Professor Esposito says that it has now become voluntary in most places. This pillar actually seems extremely enlightened, especially for the time in which it was instituted; and the point made that wealth is a gift from God reflects a becoming humility. In America, of course, we associate net worth with IQ and believe that the wealthiest are also so intelligent that they should run the country.

As to the fourth pillar, the month of fasting from dawn until sunset is beyond all imagining. Doing without sex until dark would be relatively easy, but going without water all day long is probably inconceivable to most Americans. How could we manage without all those pills we take? Nevertheless, this annual fast might be attractive to the many here who are having trouble with obesity (a 75% rate for men 25 and older, 67% for women). However, the food industry would no doubt lobby for legislation to obstruct this pillar.

Now for the fifth pillar, the Hajj. The thought of being in a crowd of over two million people circling the Kaaba seven times as required inspires a long-distance panic attack. Tragedy is, in fact, not uncommon. This September a stampede resulted in the death of over 2,000 people. I know ritual can create altered spiritual states, and the video link above reveals how powerful this form of worship is. However, the shoulder-to-shoulder community walking and praying endlessly in 110-degree heat suggests a need to rethink. Muhammad could not have anticipated a future of more than two billion Muslims; and Islam, like all religions, is being challenged by change.

Human beings are very interesting, aren’t we? And as I worked on this, I realized that the ways of America sometimes seem as foreign to me as Islam. Occasionally, however, all of humanity is blessed by the emergence of individuals with inspiring new insights, ideas, and hopes for us. Unfortunately, the transmission sometimes gets a bit tortured and in ways that bring out the worst in us as well as the best. That will be the orientation of my next blog.

2 Responses to “Toeing the Line in Islam”