In the beginning of the pandemic, we were imagining getting back to “normal” as quickly as possible. However, day by day, the return seems more elusive. So how do we navigate through a shifting reality?

Perhaps it’s time to begin tapping into individual ways of knowing that we have collectively never really cultivated.There is always the pressure to conform to be accepted. Now, however, there is evidence that conforming has made us vulnerable. Time to think out of the box and away from screens, to access individual ways of seeing, learning, and knowing. My first experience with that potential began in 1996 when a little Samoyed puppy entered my life. I thought I would share it to illustrate possibility.

The setting was Nashville, Tennessee, and the year was 1996. My former husband and I had just moved there, the first of four moves punctuating his flourishing career. My role, as I saw it, was in part to create beautiful homes that kind of framed his ambition and would enable us to spend as much time as possible with his distant three children. I had left behind a very challenging career and could also focus on other interests like writing. Very soon after settling into Nashville, we acquired the little puppy to make the children’s visits more fun. The evidence that an extraordinary awakening was pending came even before the puppy entered our lives.

Before the children arrived for their summer visit, I had found a breeder of Samoyeds in Georgia who would have a puppy available soon. She offered to bring up three for us to meet one evening. A few days later and for a significant amount of time, we watched as they gamboled under a bright moon. Eventually we selected a male. A telling moment came for me when he paused and rested after playfully mounting the other two puppies. He turned and his eyes met mine, and I knew he was the one. 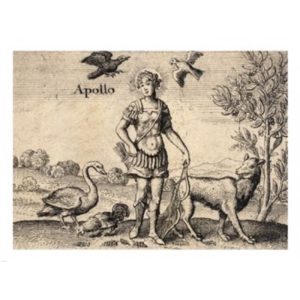 When the children arrived, my stepson, who had been studying Greek mythology, suggested the name Apollo. A few days later we set off for a wonderful family vacation along the shore of Lake Michigan. The children were especially excited to see their cousins, knowing that their sadness about leaving would be tempered by the excitement of meeting Apollo.  While we were there, I had an extraordinary experience.

In trying to get grounded in my new life,  I had among other things taken a class on keeping a “painting journal” to jump-start my creativity. From the very beginning, I was most inspired by images in nature that seemed to suggest a story, like a zebra moth discovered under a doormat, a lizard transfixed on a rock, and poison ivy dying on a pine tree. I was learning that if you’re going to draw something, you have to look at it very closely. When you look, you begin to see. And it seems that things begin to appear for you to see. That’s where the magic comes in.

The day after the Fourth of July in Michigan, I was visiting with family at the kitchen table when the brush of white wings overhead caught ear and eye. Told that  it was probably a flock of seagulls, I thought no more of it. A little while later, I headed down to the beach with my art supplies. There I discovered that the white birds I had noticed were actually a flock of white swans. They had assembled for their portrait on a lake gone as smooth as glass. As I worked with my water colors, I decided fancifully that their appearance must mean something. I titled my painting “Swan Omen” and dated it as always.

A few days later we returned to Nashville. As we drove up the road toward our mountaintop home, the evening sky threatened with thunder and lightning. While everyone scattered to unpack, I headed straight to my office in the basement to see what I could find out about the symbolism of swans. A book on Native American lore revealed that they are associated with the cultivation of intuition and altered states of awareness. The lives of “swan medicine people” are healed and transformed by surrendering to the power of Great Spirit. What a lovely bedtime thought.

The next morning before the children were up, I called the breeder to make arrangements to pick up Apollo. In leaden tones, the young woman told me that the entire litter, which was too  young yet to be vaccinated, had been infected with Parvovirus while we were gone. All the puppies had died. Apollo was the first to go.

How could this be? I hung up the phone in a state of devastated disbelief. How could the adorable puppies frolicking in the moonlight be dead? And what about that moment when Apollo had turned to address my very soul? How could such a promising beginning have come to such an abrupt end? And how were we going to explain this to the children?

Of course I called my husband immediately, and he told me not to say anything until he got home. He would bring some materials to help me find another breeder. I went through most of the rest of the day wearing sunglasses to conceal eyes that watered every time I thought about the puppies. When my husband arrived, my middle stepdaughter met him at the door. “This is the happiest day of my life,” she said.  “We’re going to go get Apollo tomorrow.”

My husband gently explained that something unfortunate had happened. We assembled as a group, and as he related the tragedy, the children’s faces went blank, just trying to comprehend. Of course, they had never seen the enchanting puppies, and the loss did not seem very real. They were assured that we would find a replacement for Apollo as soon as possible, and they accepted that promise with grace. 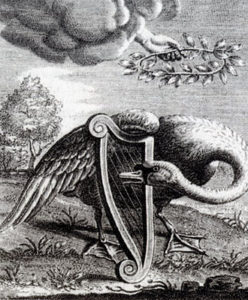 After a comfort-food dinner of steak and strawberry shortcake, I returned to my office, sure that I had unfinished business with the swans as an omen. This time I turned to Hans Biedermann’s Dictionary of Symbolism.  Here I learned that the swan was present at Apollo’s birth and carried him across the sky, thereby instilling the gift of prophecy.

It was probably the Greek dramatist Aeschylus (525-456 BC) who first recorded the belief that the swan foresees its own death and emits extraordinary cries, the “swan song,” to mourn its impending demise. I retrieved my painting journal and looked at the date of my entry: July 5, also the day when the puppies died. There had been five puppies; there were five swans in my painting.

I sat for a while, my mind reeling at all the coincidences. You can’t make up this kind of thing. The detail is too intricate, the trail too long, the outcome too compassionate in effect for the story to be random. To have lost the little puppy named Apollo so soon after experiencing a powerful connection with him was the kind of thing that can taint the mind. However, the mystical moment had served to transmute the tragedy. Now it seemed that the swans had descended on the lake with a message: “Do not take this life too seriously. There is more here than meets the eye.”

I ran upstairs to tell my husband, who was reading on the sofa. I shared for the first time the sighting of the five swans, their connection with Apollo, the swan’s fabled gift of prophecy, and the timing relative to the death of the puppies. “I guess they came to say goodbye,” he said.

He also suggested that I tell the children, and they came downstairs and gathered around to hear my explanation of the magical teaching. Even though they had been studying mythology, this was complicated, and my extemporaneous presentation probably inadequate. They seemed puzzled but asked no questions. When I finished, everyone simply returned to what they had been doing. It must have been a lot to process.

I went back to my office with the treasure of an extraordinary synchronicity in hand. I had the sense of a door opening, of having encountered a compassionate and good-humored intelligence that had much to share if I would just pay attention.

And I did pay attention, continuing to record my daily experiences in a journal that would result in a memoir from which I lifted this history. It is a matter of living thoughtfully, and it seems particularly important during this extraordinary moment in history. It is as though, just in paying attention, one may access guidance that has always hovered. There are signs in many places that a wisdom beyond human is eager to help us move to higher ground than that to which history and culture has confined us.

*A thank you to Steve O’Neill, whom I have written about earlier, for the title of this blog. It comes from his song “Maybe Tomorrow” in his “Brand New Day” album.

3 Responses to “Tomorrow Has Passed*”