In Donald Trump, the world has been given a crash course in the Trickster archetype.

The statement above paraphrases an idea from a paper by Jerome Bernstein, a Jungian analyst. It was read at a community program of the C.G. Jung Institute in Santa Fe on Friday evening. The title of this blog does not represent a move into name-calling. The Trickster is an archetype that may help us prepare for and benefit from the challenge of a new kind of leadership in the White House.

But first, archetypes. These are the mythic characters Carl Jung believed resided in the collective unconscious of humanity. There are 12 primary ones including the familiar Hero, Sage, and Lover archetypes many of us have encountered in real people. The Trickster that Bernstein recognizes in Trump is also known as the Jester, the Fool, and the Joker. He said that among many Native American tribes, Coyote represents this archetype.

I had originally learned about Coyote as the Trickster in The Medicine Cards, a tool for divination developed by shamans and healers Jamie Sams and David Carson. Their intention was to use characteristics of animals to teach “the lessons of being human, being vulnerable, and seeking wholeness with all that is.” What a wonderful break from politics, but their description of Coyote certainly brings Donald Trump to mind.

Coyote appears in chapter 13. (Uh oh.) However, we are immediately reassured by learning that Coyote is often known as “Medicine Dog.” Medicine in this context means not only the healing of body, mind, and spirit but also restoring the connection with “the Great Mystery” and all of life. The bottom line is that when Coyote appears, medicine is on its way. Great.

During the panel discussion Friday, there were repeated suggestions that Trump’s ascendance is a call for the nation to take a long, hard look at what he is mirroring for us. He was diagnosed as narcissistic at an earlier meeting, and there had been good-humored acknowledgement among analysts that their clients are typically not the narcissists but the individuals trying to cope with them. Now we have the entire nation trying to cope with one. 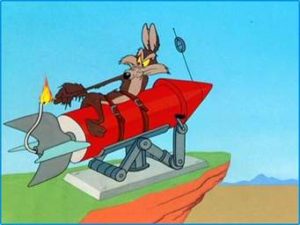 An important characteristic of Coyote in native lore is that he is the “master trickster who tricks himself.” He has unwittingly perfected the art of self-sabotage. It now seems that Trump didn’t think he would win and perhaps didn’t even want to win. He seems tired now and subdued as well as oddly courteous as he gets in touch with the consequences of victory.

One is that he won’t be able to live in his penthouse mansion in New York anymore, and he has been sternly advised to liquidate all of his holdings in order to avoid conflicts of interest. Although he said he never would, he has been forced to settle for $25 million a lawsuit against Trump University. The Trump “brand” he as spent a lifetime developing is damaged, vulnerable to retaliation by those he has threatened, denigrated, otherwise damaged, and politically defeated.

So why did he run if he didn’t really think he could or would win? What was his plan? Was he just improvising as he went? If so, this would track with the Coyote archetype. According to native lore, Coyote is impulsive: He catches his tail on fire playing with matches, then nearly drowns when leaping into a fish pond to save himself. He seduces a concrete statue. He mistakes a rattlesnake for a bone. Things go wrong again, again, and again.

He is also a master of illusion, and we are warned: “Coyote may put you in his spell and take you to a brier patch to pick berries. It will be a painful lesson for you if you follow him.”  Trump’s most avid followers come to mind, those who will inevitably learn that all he promised is just not possible.

Trump will experience the consequences of ongoing impulsiveness, but so will the entire nation. However, there does seem to be hope, which Bernstein shared at the end of his paper. He pointed out that the President of the United States is also an archetype, and he posed a question: Is it possible that Donald Trump will be transformed by that archetype? His answer: “Yes.”

One wonders how this could happen, since it seems to require relinquishing one identity to assume another. Maybe Trump needs to add a Jungian analyst to his staff to help him work through this. But is it possible that transformation could begin with the simple act of moving into the White House? For one thing, it will mean the radically altered perspective of living at street level rather than gilded heights.

The White House is loaded with so much historical significance, so much symbolism. Forty-three men have served as President, and John Adams was the first to inhabit the White House in 1800. Is there within an energetic residue of important events and of the minds, emotions, and striving of the men–some of them wise and humane leaders–who resided there?  Can one be infected, even reluctantly, by a sense of responsibility to the entire nation, the world, and Earth herself?

It would be interesting to ask Carl Jung that question, assuming that he agreed with Trump’s Trickster label. Jung wrote that it applied to a person who is not yet fully conscious, “corresponding to a psyche that has hardly left the animal level.” That sounds a little harsh, and I’m sharing it only as information.

It does seem that an awakening is due and that it will probably be painful for us as well as Donald Trump. As I mentioned earlier, he serves as  a mirror of our country in some ways. What we see in that mirror differs, but we all seem to be gearing up to improve the imagined image.  Chaos looms in the moment. Over the long run, however, increased participation could be very good medicine for our democracy. Perhaps Medicine Dog will, in the end, bring us a healing.

5 Responses to “Trump the Trickster”