Economic growth through consumerism does not necessarily lead to happiness—in fact, possibly the opposite.

Interesting how a memoir by a friend’s late uncle, a book by an Australian environmentalist, and an article on psychiatry can converge to make a powerful point: If even more difficult times are coming, they could be very good for us.

I think I’ll start with the points made by the Australian environmentalist Paul Gilding in The Great Disruption. He comes right out and says that we need to get over the idea that our world economy is capable of infinite growth. For one thing, we would need 1.4 planets to sustain the current drain on resources.  (This is according to a research organization called the Global Footprint Network.)

Nevertheless there is a lot of talk about promoting economic growth through government stimulus, government reduction, tax incentives, tax reductions, etc. However, with the U.S. economy stalled, Europe facing an economic crisis, and China and India faltering, uneasiness is growing.

We associate economic growth with consumerism, as if we could all help create jobs by going shopping, which would make everyone happy. However, Gilding makes the contrary point: Economic growth through consumerism does not necessarily lead to happiness—in fact, possibly the opposite.

Gilding cites a book called The Spirit Level by Richard Wilkinson and Kate Pickett. Their research seems to prove that economic growth leads to ever greater income inequality, and the perception of inequality creates a multitude of social ills that make us very unhappy.

For one thing, inequality creates anxiety and status competition, which marketers effectively exploit. One needs ever more income to keep up, which leaves less and less time for family, friendships, community, and the leisure that enhance quality of life.

It is actually very reassuring to discover that people are basically not so shallow as to be made happy by the acquisition of more and more stuff­­–or the prestige this, the status that, the statement whatever. And that brings me to the article in The New York Review of Books (June 2011) on “The Epidemic of Mental Illness: Why?” by Marcia Angell, M.D., and former editor of The New England Journal of Medicine.

About ten percent of Americans over age six now take antidepressants. Dr. Angell believes that the pharmaceutical industry has basically corrupted the profession of psychiatry to turn Americans into massive consumers of psychoactive drugs. She points to research showing that these drugs are of questionable effectiveness to begin with and can actually damage neural function over the long term.

Of course, depression isn’t the only problem. There is a reference book for psychiatrists called the DSM, which provides diagnostic criteria for 365 different mental disorders. Can it be that stress and discontent are showing up in a host of symptoms the pharmaceutical industry has organized into a mind-boggling marketing opportunity? And does taking drugs make us happy?

And now to the memoir I mentioned at the outset. The collection of 54 stories was written by my friend’s ancestor, Uncle Walter, and they share his memories of growing up in Texas in the 1870s. Walter died at the age of 83 after retiring as a Methodist minister, and his childhood seems to have been extraordinarily happy.

He lived in the log cabin his father built, and the pioneer life was challenging. There were none of the conveniences, and he worked as hard as an adult herding cattle and baling cotton. Much of what his family ate he hunted and fished for, and wild game was abundant. There were two stories about home life I especially enjoyed. 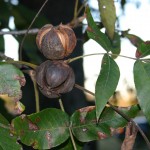 One was about how Walter would gather hickory nuts and tuck them into the cracks between the logs of the family cabin, all the way up to the ceiling some years. When the nuts were seasoned and ready to eat, the family would gather around the fire after supper and feast on nuts while listening to stories about Indian wars and rustlers.

In another story, he describes a treat baked in a “jamb,” apparently a device placed in the coals of a fire to roast sweet potatoes. Walter recalls the happy bedtime moment: “If my good readers may imagine a small boy seated on the floor in front of a warm winter fire removing the outer covering from a big potato, there is a picture of contentment and supreme satisfaction.”

Amazing, getting excited over a potato.

We’re never going back to those good old days, of course, but Walter’s stories remind the reader how great simple pleasures can be and how few of those we have anymore. At this time in American history, we may be standing on the threshold of a new, very different reality, and Walter’s memories seem very timely.

They give one hope that, with the benefit of wisdom gained about the downside of our current way of life, we may begin to construct something better. Perhaps many of us have good reason to be discontented and depressed, and perhaps we can change that.