How inappropriate to call this planet “Earth,” when it is clearly “Ocean.”
Arthur C. Clarke

So why even think about packing for departure from planet earth? Well, this offsets the effect of the typical science fiction movie that makes exit look very simple in a metallic and flaming kind of way. Considering what to take and what to leave behind makes one really think. Maybe home needs more thought. 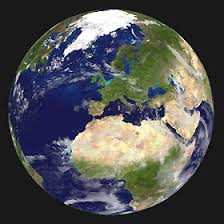 Now it seems that we could hardly be farther from such rationality. Here, society is fragmented in countless ways by things like state culture, income level, profession, political party, etc. Internationally, the conflict in the Middle East among different nations, races, regions, religions, tribes, sects, terrorists, and extremists seems to symbolize the ultimate potential for chaos. Joseph Campbell is revered as one of the most learned men of his century, but, boy, was he wrong in his belief that a mythology of oneness would emerge from the new perspective on planet earth.

So is it possible that a combination of conditions like overpopulation, climate change, and conflict could mobilize an evacuation of at least some of us to save the species? If so, would our old ways travel with us? And what things would we pack to take along? Those questions caused me to imagine a meeting . . .

A tall woman walks onto the stage in a long, slender stem of glistening, gray fabric, her white hair captured in a chignon at the nape of her neck. Known as Mara, she addresses her expectant audience gently. “My congratulations,” she begins, “for enduring the tests and the grueling training of the last three years.”

Her pale, blue eyes read the uneasiness in theirs. “As you have already detected, your number is significantly reduced from our last meeting. There has been a winnowing, and you go forward with those who have proven a passionate commitment to this mission. That winnowing will continue until the end of the year, and then we will proceed.”

The audience before her is youthful on the whole, and it is planned that some of the women will become pregnant during the seven-year journey to the planet Morphea. Their ship will land with children who have never set foot on earth, who will know only their new home. They will be descended from a lineage that has been carefully selected from races on every continent, and a treasure of genetically superior DNA will also be transported for the purposes of reproduction and evolution.

“As you know,” Mara proceeds, “my responsibility is for the cultural and spiritual inheritance we will carry with us. We have engaged the greatest intellects all over the world to choose the teachings, in the form of both literature and sacred wisdom, that will become the foundation of our new community. That work is now complete, and we are ready to disperse it among you, as you begin to retire some of that which came with you.” There is to be no discussion of this matter.

“Understand,” she says, “that we will be transporting no history, no dogma, no art, and no stories that will recreate the world we will be leaving behind. Neither will this material serve to sustain the grievances, enmities, or the adulation of certain individuals that fueled the wars that finally brought us to this pass. We have a large measure of forgetting to do and a new mythology to create.

“This may sound extreme, but our survival depends upon focusing on our commonalities rather than our differences. We are all family now, your only family. Your challenge is to cultivate the individual gifts for which you have been chosen while also maintaining a sense of unity. Hopefully, this can be accomplished without becoming totally bored with each other.” She smiles.

“And I am here today to offer you the opportunity of closure with your home on this planet. Soon we will have to be cut off from all contact with the outside world. In the meantime, we have identified four unspoiled landscapes–seaside, plains, mountains, and desert–where we can provide security during one last visit. For those of you who would like to say farewell to a natural setting you have loved, applications await in your quarters.”

The hall is silent for a moment, and a few people glance around, wondering who is interested. Then a young man raises his hand.

“Have you decided yet about the dogs?” he asks anxiously. “Will we take any dogs with us?”

Mara’s face softens. “We will be taking the potential for their reproduction with us. However, there are many uncertainties. I would suggest that you enjoy Cabby and Rice as much as possible for now.”

Danton’s face falls, and his sadness seems to travel through the group. Cabby and Rice are known to them all.

“I am sorry,” Mara continues, “but we do have hope.” She proceeds to wrap up the meeting with a summary of the goals for the remainder of the year. Without inviting any questions at the end, she bows slightly, her hands clasped, and then walks off the stage.

A deep voice touched with humor greets her in the wings. “How many do you think will come back from those little sightseeing trips?”

Mara pauses. “Knowing them as I do, I think only three will even go. Why would one opt to bond so late with the natural world? And for those who have, this is yet another test.” She walks on.

“One you will pass?” the man wonders aloud.

Hmmm. To be continued, perhaps.