Funny where the study of Islam took me—to a new perspective on organized religion in general.

I was going to devote this final post on Islam to a review of the range of thinking among Muslims about the role and relevance of their religion today. However, this is probably not a matter of great interest to Americans in general. In addition, this set of lectures by Professor John L. Esposito was published in 2003 before we launched the War on Iraq, and the dynamic has probably changed significantly. I will summarize his view, however.

At one end of the spectrum are the fundamentalists who would like to go back to life as it was in about 700 AD. At the other end are the modernists, members of the intellectual elite. They would prefer a secular state and reforms that would turn Islam into “the religion of reason, science, and nature,” as Esposito puts it.

For those who see Muslims as a people of uniform character, it might be interesting to learn that, among those trying to adapt Islam to the modern era, there are many who question the historicity of some of its narrative and the ways in which early law schools, post-Muhammad, influenced the development of Shariah Law. The overriding question seems to be, “Is restoration or reformation the way to go now?”

All three of the religions descended from Abraham have adherents grounded in the past–the Orthodox Jews, the Muslim extremists, and the Catholic traditionalists and Protestant fundamentalists among Christians. They are dedicated to sacred disciplines from which others in their community have strayed. But no matter how exacting their practice, are these three religions the ultimate–or will they eventually cede to a revised perspective?

After all, as one looks at the spiritual history of humanity, it has evolved along with us. For example, God in the Old Testament seems more harsh than in the New Testament; and the deity associated with Muhammad seems a bit distant, focused on technicalities and communicating through a secretary-like angel. If Muhammad was tapped to be the last prophet, as most Muslims believe, it makes one wonder if God was getting fed up with us.

Further, the challenge of modernity that the three religions of Abraham are coping with may be as nothing when compared to the complication of an evolving planet. In this regard, a recent news article causes the imagination to take off. It indicated that the devastating magnitude of climate change may manifest early in the Middle East. 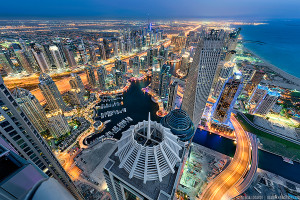 Dubai, the first city on the Persian Gulf to experience “intolerable” heat?

I am referring to a research paper published in October in the journal  Nature Climate Change. It predicts coming heat waves and humidity that would translate to about 165 degrees Fahrenheit around the Persian Gulf, probably in the next century. Just being outside for a few hours could prove fatal.

As I wrote earlier, Muslim extremists tend to associate misfortune with falling out of favor with God, and they have a pattern of responding by trying to “purify” Islam. What if temperatures rise relentlessly no matter what they do? And if drought, floods, and violent storms travel the planet over, sparing none of the religious whether they worship in synagogue, cathedral, or mosque, how will they understand this?

It is significant that the concept of the all-powerful Father God emerged in the Halocene epoch, the 11,000+ years during which the climate has been extraordinarily hospitable. Scientific evidence suggests that it is coming to an end, and rapidly. Over the very long run, certain historic religions may be included in the profile of the Halocene epoch.

Before he died, Joseph Campbell observed that the world needed a new mythology. Surely the existing ones will change, but not just yet. Let’s return to Islam for the moment.

At one point in his lectures, Professor Esposito stated that God has repeatedly sent prophets to guide us. He is Catholic, and when he said that, my attention faltered. That statement represents so much in theology that you just have to believe without question, and that’s not my way. If Muhammad was a prophet, has there been one since? Not as far as I know. Perhaps the era of prophets descending from Abraham came to an end long ago.

However, in the sense of a prophet being a person who predicts the future based on knowledge, we have many working among us now. They are the scientists who have dedicated their lives to studying the ways of our planet. And in fact, it may be through them that the generations of a dangerous new epoch will maximize their chances of survival. And let us consider this: Perhaps the minds and the dedication of these scientists are, in fact, gifts from the Divine–whatever that may be.