If I were President of the United States, everyone would start getting homework assignments. This book would be on the required reading list.

So why is When Breath Becomes Air by the late neurosurgeon Paul Kalanithi so important? First of all, it is a beautiful memoir by a brilliant young man facing his impending death, and his sharing will probably be a gift to every single reader. Secondly, he addresses a philosophical question that is vital to each of us and to this country. 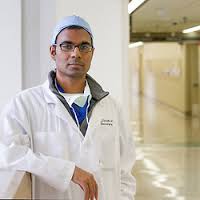 Paul—and I speak of him by his first name because I now feel as though I know him—had recently completed his 10-year residency in neurological surgery at Stanford University School of Medicine when he died last March at age 36. His perspective on his fate was enriched by an intellectual foundation in the fields of English literature (a B.A. and M.A. from Stanford), philosophy (a Ph.D. from the University of Cambridge) and medical science (an M.D. from Yale University). All these studies informed his lifelong interest in one question: “What makes human life meaningful?”

As the book opens, that question has become tragically, personally relevant. The rigors of Paul’s responsibilities as chief resident have gone beyond anything most of us could imagine. Troubled by exhaustion, back pain and unexplained weight loss, he has finally sought the diagnosis he and his wife, also a physician, have feared. Cancer has invaded his body like a deadly algal bloom. Paul has been putting off living until he can enjoy it post-graduation. Suddenly, only months of life remain.

This sounds very depressing, but the memoir certainly isn’t. Paul writes with candor and sometimes even humor as well as great skill, and the reading experience feels pleasantly intimate. The book was recommended to me by a friend who is a retired specialist in infectious diseases, and it was very timely. Three people I know are at this moment facing impending loss, and I felt a little emotional as I sat down to read. When I finished a few hours later, however, I felt personally fortified rather than weepy, and I knew that many people would similarly benefit. (The memoir was an immediate bestseller when it launched on January 12).

A source of comfort is Paul’s eventual realization that his fate may have been summoned by his own choices. There was no way for him to understand what gives life meaning without also contemplating death. Although he could clearly have been a wonderful English professor, he ultimately chose to go into medicine and specialize in neurological surgery, as much for “its intertwining of brain and consciousness as for its intertwining of life and death.”

His passion for the science and his empathy for patients ultimately ensured a brilliant future. Before the cancer diagnosis, Paul already knew that he could become a specialist in probably any one of the most outstanding institutions in the country, and he would enjoy wealth as well as prestige. But then his diagnosis came in.

The ensuing decline he relates in the book fluctuates through the limited benefits of the best treatments available, and there comes a moment of anger at God: “I work my whole life to get to this point, and then you give me cancer?” Nevertheless, he realizes that there has been a deficit in understanding when he counselled patients confronting the end of life, and he concedes: “Shouldn’t terminal illness, then, be the perfect gift to that young man who had wanted to understand death?” 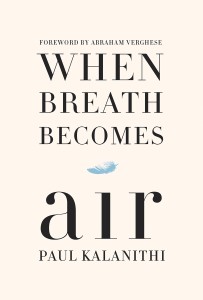 As Paul approached the time when he would no longer be able to work, he was troubled with the questions: What can I do? What can I be? He returned to literature for comfort, studying the work of great writers who had pondered mortality. And when he was too ill to practice any longer, he followed in their footsteps, writing about his own journey toward understanding. “I needed words to go forward,” he wrote.

The most touching part of the book for me was the account of his last day of work. It begins with the moment when he emerges from his car in the hospital parking lot, and he pauses briefly. He inhales deeply the scent of eucalyptus and “. . .was that pine?” He had never noticed before.

In the epilogue written by his wife, the reader learns that Paul’s memories of his youth near the beginning of the book were written very near the end of his life, when metastasis in the brain had made it difficult to focus. These pages include descriptions of a natural world acutely observed, and the images are sometimes ethereal. In one place, he describes the landscape on a camping trip : ” . . . craning your head back, you could see the day’s blue darken halfway across the sky, and to the west, the night remained yet unconquered–pitch-black, stars in full glimmer, the full moon still pinned in the sky.”

Paul’s life came to an end in the hospital when he signaled to his wife, “I am ready.” The reader is left with the impression that he, like the morning light he described above, had finally conquered darkness.

That triumph seems to leave the reader with the challenge to do the same when the time comes–actually long before the time comes. There are many signs in our culture that the values by which we have defined a good life are not necessarily the ones that define a meaningful life. In so many ways and places, those values have clearly proven unworthy of the soul’s need for meaning, and reexamination by the individual would benefit the entire nation. Thanks to Paul Kalanithi, thousands have probably already embarked on that journey.

3 Responses to “‘When Breath Becomes Air’”