Though the characters are fictional, they feel like family.

“Where did the idea for your novel come from and why did you make Alabama the setting?” These are two questions I’m often asked about The Inheritance, my first novel, and the answer is simple: childhood memories.

Born in the South like the main character, Martha, and raised in the West like her, I once overheard my parents talking about a scandal within a prominent Texas ranching family we knew. There were three sons—attractive, wiry cowboys—whose relationship was wrecked by rivalry over a woman. Her name was Helen, and her story would later remind me of the disastrous infidelity of Helen of Troy. I never forgot about Helen, and she became Edwinna, the temptress aunt, in my novel.

As in the Texas story, there are three brothers in The Inheritance who have become estranged over a woman, but the ranch has been converted into a family-owned community hospital. And why a hospital?

For one thing, there is a theme of healing afoot in the story. In addition, I was steeped in healthcare for many years, first in managing public affairs in a large hospital in Houston, second as a freelance writer with healthcare clients, and third through many years of marriage to a healthcare executive. I find the industry fascinating and eventually added a layer of drama by placing the story in 2010 on the threshold of healthcare reform. 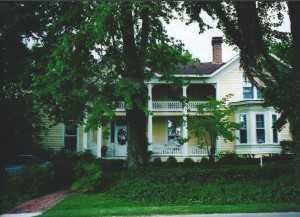 The novel takes place in the fictional, small town of Atheneum, Alabama, where Martha and her husband, Sam, have come for the reading of a will. The setting was inspired by my own summer visits to Scottsboro, Alabama, when my family stayed in an ancestral home that captured my imagination. If, as invited by the terms of the will, Martha and Sam return to his hometown to live, they will move into a similar residence.

When I began writing The Inheritance, my descriptions of Alabama were based on memories decades old. However, due to an odd coincidence and years after the first draft of the book was finished, my own husband was recruited to take over management of a healthcare corporation in Birmingham, Alabama. My impressions of the South as a child were greatly enriched by more than a year of residency.

In conclusion, although none of the characters in the novel resemble people I actually knew, in a way they have the feel of family. When I look back on the plot now, there are also respects in which it seems almost prophetic about experiences that were waiting in the wings of my own life.