“This is the best reason to learn history: not in order to predict the future, but to free yourself of the past and imagine alternative destinies.”

Sapiens: A Brief History of Humankind is a phenomenon. This is not only because it has sold more than eight million copies worldwide but also because reading the 414 pages of this brilliant book is a form of therapy. How can this be? 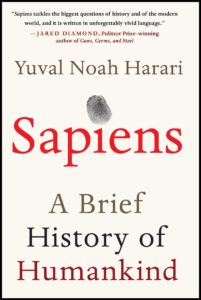 A Texas friend recommended this book to me, and since I’m fascinated by anthropology, I soon bought it. I had no idea how soothing the long view of humanity would be at a moment in time when the entire world seems troubled by disputes over geographic and ideological turf. How could a professor of history at the Hebrew University of Jerusalem save us?

After all, we’re in an era when everywhere we look besides a mirror–whether the visage is local or foreign–we are likely to see “the Other,” a person of a different sex, race or nationality, to be distrusted or feared simply because he or she is “different.” The genius of Harari’s work is the way that, page by page, he turns that mirror into a window with a much broader view.

He begins with “organisms” belonging to the species Homo sapiens that began to form cultures 70,000 years ago. And as his attention travels throughout time and to our gathering places all over the world, the reader slowly begins to realize: This is not the story about “them” still stuck over there and “me and mine” coming over here to achieve a pinnacle of wonderfulness. This is about humanity–“Us.” All of us. And then as the story approaches its conclusion, a question begins to manifest: “Where to now, Sapiens?”

But let’s go back to the early critical juncture in our story that is extremely relevant in the present moment. Harari refers to this as the “Cognitive Revolution,” and this has to do with the development of language. It enabled Homo sapiens to share information and also to “gossip,” as Harari puts it. This helped everyone understand what was going on in a community and how to cooperate socially, which was key to survival.

However, the most important thing, Harari writes, was the ability Homo sapiens developed to talk about things that didn’t really exist, to create stories and myths about guardians, angels, and gods that inspired communities of believers. This led to the establishment of religions that ultimately leaped international boundaries in creating spiritual empires of millions of people. Fissures are becoming visible in the largest among them, including Harari’s own Judaism as well as Christianity, Islam, and Buddhism. Will they endure?

And along the way also came the Agricultural Revolution, the invention of money and capitalism, the Industrial Revolution, and the Scientific Revolution. They have served to create the greatest wealth and comfort that humankind has ever known and seemingly unlimited potential to redesign ourselves as well as the world around us. However, Harari states that “Every new invention just puts another mile between us and the Garden of Eden.” The horrific cruelties of the animal industry come to mind. 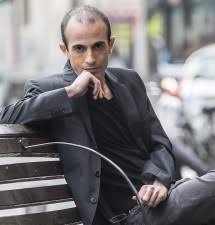 “Are we happy?” he asks in a variety of ways. Are health and wealth the most important factors? How about religion? Do we need to restore our early bond with nature? And what about family? How important is it?

But is it also possible that we could graduate to a sense of community with all the members of our unique species? Or would we prefer to advance technology to the point where we can replace Homo sapiens with “alien life forms,” as Harari describes them, “whose abilities dwarf our own”? Maybe they could get along with each other.

In conclusion, Yuval Noah Harari really provides the material necessary to think out of the box about who “We” really are and decide whether and how Homo sapiens will endure much longer. And herein lies the comfort of this book.

If it has sold eight million copies worldwide, then millions of people everywhere are thinking about these questions. Can it be that the time is coming to put aside our grievances, figure out the values we have in common, and work on the way to make an evolutionary leap in our own flesh? If so, the future could be even more fascinating than the past.

One Response to “Where to Now, Sapiens?”