Narcissist Personality Disorder: One of the few conditions where the patient is left alone and everyone else is treated.

I don’t know who is responsible for the definition above, but it seems to be common knowledge among psychoanalysts. I learned this at a lecture by Stephen Kenneally, an analyst who spoke Friday evening for a meeting of the C.G. Jung Institute of Santa Fe. His topic was hefty: “Narcissistic Defenses and the Self: A Jungian Perspective on the Persona’s Agenda to Defend the Unformed Self.” The unspoken understanding among attendees was that Donald Trump’s candidacy had made this a very timely topic.

Did someone at some point label him a narcissist, or is he intuitively recognized as such, even by those who don’t know the term? Its origin is interesting, so I thought I would share. 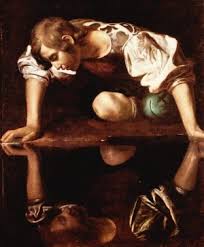 The shorthand is that in Greek mythology, Narcissus was a beautiful young man who fell in love with his own reflection in a pool of water. He was so fascinated by his image that he could not leave, and he died by the pool. Named with his story in mind, narcissism is now defined as “undue dwelling on one’s own self or attainments.”

Kenneally said at the outset that narcissism is a pathology whose impact is born first and foremost by everyone around the narcissist. Amusement rippled among the analysts, an acknowledgement that those people are indeed often their patients.

The narcissist is worthy of compassion, however. Carl Jung himself wrote that “Neurosis is always a substitute for legitimate suffering.” Narcissism is a way to cope with the challenge of individuating as a child in an environment hostile to the authentic self. This can be the result of bad parenting–the mother is said to be especially important in this regard–or some kind of cultural controls or conventions. I discovered elsewhere that the defense mechanism of narcissism commonly develops during the formative years, from the age of six months to six years old.

So back to Donald Trump. He represents an exhibitionism and grandiose sense of self that are often associated with the pathology. As Kenneally put it, his behavior is “completely off the map.” He said that if Hillary Clinton had a stroke and lost the ability to speak, that would be better than a fully functional Trump. The audience laughed again.

The talk now went to a general discussion of the pathology. According to Jung, one can be narcissistic in a constructive way. However, this outcome is apparently possible only when the individual acknowledges “the shadow.” This is the hate and shame stemming from the childhood sense of having been abandoned. One pauses to wonder what the dynamic of betrayal was in Trump’s family, and something about making money immediately comes to mind. Who would he otherwise have been?

Once the shadow has been acknowledged, the narcissist can work with a psychoanalyst toward completing the child’s thwarted individuation. Kenneally illustrated the symbolic nature of that journey with a story like a fairy tale.

A father puts four sons to a test to justify giving his estate to his oldest and most-likely-to-succeed son, but the story focuses on the youngest. The first test is to kill and bring back the body of a bear. As the youngest son sets off into the woods, he falls into a deep, dark hole. At the bottom is a dangerous, giant worm coiled up in its own filth.

The monster worm intends to kill and eat the son, but he refrains when the son agrees to exfoliate its ugly body. The worm rewards him by delivering a bear magically emerging from his cooked feces, and the son takes it back to the father to win the estate. The father reneges and creates another test: the son who brings back the greatest treasure will inherit. The older brothers set out to fight wars in rich kingdoms; the fourth son returns to the worm. This time, he must bathe, feed, and massage the creature, who responds with a wealth of gold.

Again the father reneges and now requires each son to go forth and return with a princess to marry. This time, the worm unexpectedly offers to sacrifice his own life for the son, who protests. Nevertheless, the worm suddenly explodes, transforming into a beautiful princess. The couple travels back to his home in a magnificent carriage. After the son presents his bride-to-be to his distraught father, they set off for another kingdom. The fourth son is free.

Now back to the present moment and the candidacy of Donald Trump. When Kenneally addressed his fundamental appeal, it seemed like the entire nation would benefit from psychoanalysis. He pointed out that Trump’s most ardent supporters seem to be people who feel helpless about the way things are in this country. This can lead to guilt about failing to do anything about it and then depression. The solution for many, as Kenneally put it, is to “Donald-up” with Trump. His voice seems sometimes to have the timbre of ancient gods. The volcanic anger, the fierce threats and outlandish promises, the boasting about legendary achievements, and the bragging about monumental wealth all reflect the way in which narcissism has empowered him. By allying with him, his most passionate followers are imaginatively empowered as well.

I’m not a psychoanalyst, but this circumstance sounds like a warning. I think those who feel helpless are correct in believing that our democracy is not working well. No matter who wins this election, it seems clear that we all need to go down that symbolic worm hole and confront the waste and the wrongs that compound in the darkness of collective denial and intransigent ideology. We need to start looking at the truth of things.

And so Trump may turn out to be the catalyst for a critical reset. As a result of the latest media storm over his attitude toward the feminine and his performance in the debate last night (which I didn’t see), his prospects seem to be waning fast. However, if he nevertheless turns out to be a catastrophe for the Republican Party or the country or both, the question is how we let this happen. It seems clear that we are going to have to confront our dark side as a nation before we can, like the fourth son who worked with the nasty worm, emerge from a black hole with a bright future.