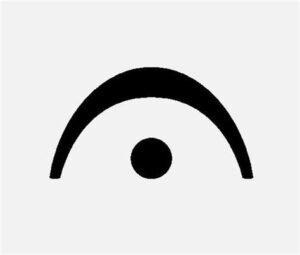 Fermata, the pause symbol in sheet music, resembles a waiting eye. Is it time for humanity to take a pause in our epic performance? To look, listen, and collaborate on a new masterpiece?

Paleontologists are pretty sure that humans evolved from a primate beginning millions of years ago. Our ensuing achievements have been monumental, and surely we have further potential. But what, exactly, is that potential? And how long do we have to access it before crashing into the wall beginning to manifest?

That question is all about time as we now know it. In the beginning, however, the sun’s track and the seasons were planetary life’s primary reference points. Perhaps the day came when an egg of our female primate ancestor–presumably a chimpanzee type–knew “It’s time.” Shortly thereafter, the sperm cell of a nearby male also awakened. It locomoted in, and our story began. 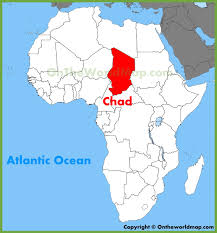 The search goes on for the fossils of the first in our species. In the most current research I could find, the most likely possibility has been named Sahelanthropus. It may have first risen on two feet about seven million years ago in what is now the republic of Chad in Africa. As paleontologists continue to study fossils in pursuit of the remains of our earliest ancestors, they look for bodies that not only stood upright but also lacked the dagger-like canines of the apes.

These were the hominids, and the ones that looked most like us, the Homo sapiens, appeared in Africa, maybe about 130,000 years ago. They left Africa about 50,000 to 70,000 years ago and moved into Europe and elsewhere. Then, in about AD 1500, some of their descendants set off for America. How is that for an historical leap? But I want to get on with my main points.

As I said earlier, the achievements of the descendants of the African Homo sapiens are stunning. The current problem, though, is the way we have overpopulated Planet Earth. It is estimated that there may be as many as 10 billion of us by AD 2050, likely more than Earth can sustain. That’s the wall beginning to manifest that I referred to in the beginning, the warning that it is time for humans to stop and think.

We assume that our primate ancestors lived in the trees when our story began seven-or-so million years ago, and it’s fun to imagine the moment when the transition to upright and standing began. Perhaps a female with a deformity–feet that were solid rather than flexible–accidentally fell to the ground. Then pulling herself up via a nearby trunk, she suddenly realized that she could see great distances rather than just a few yards in the protective but stifling greenery above. As she surveyed the open landscape, she hoped to return.

Now she glimpsed some mushrooms in the grass beyond. The red crowns of the fungi seemed to beckon, and when she carefully tasted them, her brown eyes widened with pleasure. Another reason to return. Later when she began to climb the big trunk toward home, she was carrying two mushrooms in her mouth. She knew a male who would also enjoy them. Maybe they would return to eat more. 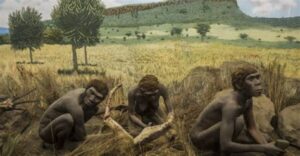 WHAT WE SEE TODAY

It is stunning to survey how incredibly our lineage has evolved since Homo sapiens appeared, again about 130,000 years ago. There is a general perspective that our advances in technology began in the Neolithic Age of about 10000 BC to 4500 BC. Scientists believe that they began with domestic activities. As Britannica puts it, this would be “the application of techniques for grinding corn, baking clay, spinning and weaving textiles and also, it seems likely, for dyeing, fermenting, and distilling.”

Now, let’s leap to the introduction of internet technology. A friend wrote that, in the early 1960s, he had experience with a precursor of the internet in graduate school. Now I’m back to the present and the succeeding meteoric rise of the related technology that is engulfing the world. Two of my major concerns now are (1) how its application may be affecting human intelligence, and (2) how its invasion into virtually every facet of our economy could prove detrimental.

The first point above is inspired by the memory of a moment in downtown Santa Fe on a beautiful day years ago. As I walked, a couple approached with a two-seated carriage for twin toddlers. There was a lot of activity all around, but the children were oblivious. They were staring at little devices in their hands that looked like miniature smartphones. “Uh oh,” I thought. This kind of technology can be used as a form of entertainment that is a babysitter in the beginning. However, it can create an addiction of the kind that distances young people from the world around them and seems enormously to diminish human interaction.

THE COST OF NEW TECHNOLOGY

Then, regarding the second point, I will return to the view of “all the empty spaces”–many of them shops–that I shared in my previous post. We understand, I think, that our patriotic duty is to consume as much as possible to keep the economy going and create jobs. However, with so many products available online, many shops, like the bookstores I once happily rambled, have had to close. I could go on and on, but you have no doubt seen this yourself. Technology is also destroying jobs, as in the automated checkout counters that replace clerks.

The primary area where sales are going through the roof is, of course, in the area of technology. I feel sorry for young couples starting families because the provision of iPhones, iPads, computers, computer games, software, and nonstop upgrades must be costing a fortune. Soon, I bet the tech industry will begin to lobby for “Tech Security” sort of like Social Security, to be financed by taxes to provide everyone with the latest products so they won’t be left out. 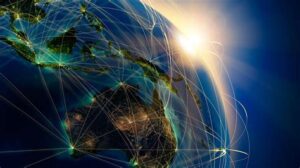 I’m sure subscribers also anticipate certain costly changes, and I’ll stop now with one last thing that concerns me, and that is about the future of the human brain. I think of that expression “Use it or lose it” in that regard. I wonder if every advance that spares us the need to use our brains–like the intrusive editing of copy and text messages–is also emptying spaces within our skulls. Are we regressing, thanks to technology?

Enough. I could go on and on and on, and I’m sure all of us can.  But I want to close by going back into the woods. Again, it was millions of years before something like a tree-dwelling primate woke up to the taste of a mushroom that inspired an evolutionary leap. Homo sapiens have since advanced at such warp speed that we are in the process of wiping out countless other species on Planet Earth while putting our own at great risk.

I’m not scared. Even as I write this, I know that we are very, very intelligent and gifted with the physical attributes necessary to turn this situation around if we choose to. And that will require some form of inspiration. What could ignite new potential? I don’t know. But perhaps something is knocking at the soul’s door, and we will have to turn many things off to be able to hear it.

2 Responses to “Will Fermata Blink?”